Independence Day Writer Reveals How He Created Iconic Speech: ‘I Whipped It Up in Five Minutes’ 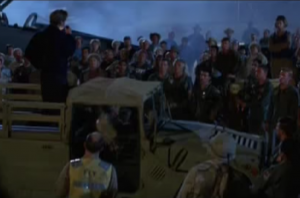 This morning, Complex Pop Culture published ‘The Oral History of the President’s Speech in Independence Day’, a rare look into the process of how one of the most iconic speeches in cinematic history was created. And despite the legendary status that the motivational speech in the 1996 alien-busting flick has earned, the truth behind the effort was much more haphazard than anyone would expect.

The speech is given by the United States President — played by Bill Pulman — to a diverse squad of air fighters about to take off and save all of humanity from a certain doom at the hands of an invading alien race. It’s 2016; if you haven’t seen Independence Day, my disappointment knows no bounds, as the speech is clearly one of the most memorable moments from the influential film.

Dean Devlin, the co-writer and producer for Independence Day, recounted the initial move to mark a sample speech simply as a placeholder for a later, much more fleshed-out oratory:

I said, “Let me kind of just vomit out something really fast now and then we’ll spend a lot of time on it later and really rewrite it and make it perfect.” So I went into the other room and literally in five minutes I whipped the speech out, put it into the script—we didn’t even read it. It was just a placeholder.

Devlin and the film’s director Roland Emmerich figured that they could also fix it later. However, the filmmakers fought pressure to get the project out, given the announcement that Tim Burton was working on Mars Attacks for Warner Brothers at the same time. While the entire script only took three weeks to complete, Devlin and Emmerich forgot to double back to the President’s speech in the third act.

Devlin said, “I remember on the day that we went to shoot it, I had a panic attack. I was like ‘Oh my god. We never got to rewrite the speech.'” Devlin, who also co-wrote the upcoming sequel Independence Day: Resurgence, continued, “This is a scene we were supposed to spend weeks on and we just never got around to it. And when I got there they were already rehearsing the speech. I was so nervous about it, but when he got to the end of the speech—all of the extras went crazy, applauding and screaming. I looked at Roland and he looked at me and we’re like, ‘I guess this speech is pretty darn good.'”

As for Mr. President himself? Pullman knew it would be a success from the moment he saw the first cut of the edit:

When I saw it for the first time, I remember feeling like the real genius of it is the cutaways to the people in the crowd, the pilots, the soldiers. It had a Capraesque quality, a Capra kind of engagement with humanity. They were all really honest faces that weren’t straining for anything, but were incredibly present. That’s what was going to make the whole speech work.

Even Michael Waldman, the director of speechwriting under President Bill Clinton, had to admit that the speech ended up being pretty authentic. “I would say that a lot of times when presidents are given words to speak on the screen, both then and now I would wince, because they are always so off. This was not off; this was pretty good,” he said.

Check out the full ‘Oral History of the President’s Speech in Independence Day‘ here, and of course, would this article be complete without giving you the momentous speech itself?

Let’s kick the tires and light the fires big daddy.