Innocence of Muslims Creator Speaks Out For The First Time, Has No Regrets About Releasing Film

Innocence of Muslims Creator Speaks Out For The First Time, Has No Regrets About Releasing Film 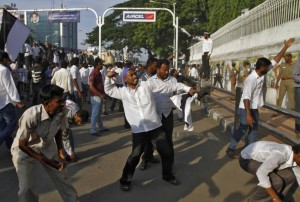 The maker of the controversial anti-Islamic film Innocence of Muslims is speaking out for the first time since his film went public and became the source of international controversy. In statements published by The New York Times, Nakoula Basseley Nakoula says he does not have any regrets about releasing the film and explained his personal hatred for Islam. The comments were sent to the Timess through his attorney, due to the prison warden at the detention center refusing to allow a direct interview with Nakoula.

RELATED: Red Eye Panel Gets Heated Over Whether Feds Jailed Anti-Muslim Filmmaker As ‘Scapegoat’ For Benghazi

Nakoula said that before he wrote the script for the movie, he considered burning himself “in a public square to let the American people and the people of the world know this message that I believe in.” He cited the 2009 massacre at Fort Hood in Texas as a catalyst for his belief that there is much violence committed “under the sigh of Allah.”

Nakoula, who previously worked as a gas station manager, bong salesman, meth supplier, and con man before turning to film, claims that he only wrote the script and served as a “cultural consultant” on the film. But he did engage in a plan to fool the actors of the film in order to serve his own agenda.

[He] explained to a confidant that his plan was to fool actors into thinking they were making a movie built around an ancient tribal villain named George, dubbing in the name “Muhammad” later whenever anybody said “George.”

In Mr. Nakoula’s responses to questions from The Times… he had no second thoughts about the way he had handled the cast. “They had signed contracts before they went in front of any camera, and these contracts in no way prevented changes to the script or movie,” he said.

Nakoula’s son, Abanob Nakoula, says that the actors were misled because his father knew the film would “create a stir” and so it was a “precaution for their safety.” Nakoula is a Coptic Christian, and initially church officials said he was an unlikely candidate for involvement in the film because of how infrequently he attended church services.

But Nakoula says he has always been fueled by the “atrocities” he says have been carried out in the name of Islam. His son insists that Nakoula is not “evil” nor does he have any personal vendetta against Muslims, saying “Don’t fight Muslims, fight their ideology.”

You can read the full piece on Nakoula here.