Mad Men tells the story of the ad world in the early 1960s. But AMC’s marketing campaign for Mad Men season 3 is very much the story of the ad world in 2009: Fans can create their own Mad Men likenesses and add them to their Twitter profiles on AMC.com; other fans have been running Twitter feeds as Mad Men characters since last summer. And of course AMC is doing all the usual marketing stuff —  like shrink-wrapping shuttle trains at Grand Central — to drum up attention for the new season. So much so, in fact, that AMC senior vice-president of marketing Linda Schupack’s campaign has become a story of its own after high-profile pick-up on Twitter (the likes of Jake Tapper) and rumors about tension between official Mad Men marketing and fan-initiated efforts. 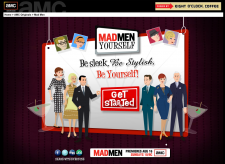 We caught up with Schupack yesterday to talk about the campaign and some of the reported tension between AMC and Twitter over the fan-initiated feeds, the risks of marketing campaigns that entertain too much, and the meta-ness of advertising a show about advertising.

Have you ever used the Mad Men Yourself page? What makes it so successful?

Sure, we all have, numerous times. And what do I think makes it so successful? You get a huge kick at the end out of seeing this Mad Men character that really resembles you

Did you expect people like ABC reporter Jake Tapper, Media Bistro’s Agency Spy and  former Men’s Journal and Details editor-in-chief Michael Caruso would be using the cartoons on their Twitter profiles?

Maybe not specifically, but I have to tell you this is exactly what we hoped for. We’re just enormously gratified that it’s taken off the way it has, and it’s because of the power of social marketing.

Are you worried that the marketing is taking away attention from the show itself?

Do you think that you would have come up with the idea for the Mad Men Yourself application without inspiration from a fan like Dyna Moe?

To be frank the idea for Mad Men Yourself and create-your-own avatar was in fact developed by marketing people here. We were familiar with Dyna Moe and we loved the way she captured the show, and we thought that marrying her style with this paper doll, make-your-own avatar idea would be a really innovative way to let fans enter into the world of the show.

Can fan-based marketing initiatives be successful on their own, without collaborating with marketing teams?

You love it when there’s a fan-based movement, and the organic quality that comes with those. There are some things that need to be ignited. The reality is that something like make-your-own Mad Men avatar — that’s a really sophisticated program. That’s a hard thing to be generated by a fan … But it’s because of the great interested and passion that the show engenders in its audience that we can do something like Mad Men Yourself.

I’m also thinking about the Twitter feeds – some people have speculated or even reported that there was a DMCA notice sent from AMC to Twitter, asking for the feeds to be shut down. When Brian Stelter reported on the feeds, he ended his piece by suggesting that there might be an agreement between the fans running the feeds and AMC.

Can you clear up the relationship between your team and the Twitter feeds?

They were fan generated, but have you since taken them over?

I know some of the people behind it, but not through any sort of business relationship.

Where do you think these rumors got started that AMC sent a DMCA to Twitter?

I have no idea, truly.

In the Talk of the Town piece you said that campaigns need to have a central coherent image. Is that difficult to reconcile with fan-generated marketing efforts?

No. When I was talking about creating a key image, we want a key image that expresses what the show is about. For any media that requires a single image you want to be consistent because there’s power in the frequency and repetition of that image.

Would it be absurd to think that you worry about fan-generated efforts derailing your work?

With tightening advertising budgets, do you think that shrink-wrapping trains and sending out street crews, as you’ve done around Grand Central, will ever give way to campaigns that exist on the Internet alone?

As long as people continue to take subways … You want medium and message to marry, but you also want your message to jump out. The unexpected quality of wrapping a subway train gave us a lot of kick. I’m not saying we’re not going to do it again, but you always want to surprise and delight.

Social media – Mad Men Yourself – people weren’t expecting that. The challenge is always to come up for something new. 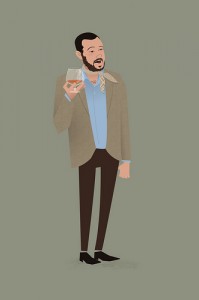 An illustration by Mad Men fan and professional illustator Dyna Moe of a character on the show. Moe

And when you think about the bang you’re getting for your buck, are Twitter and Flickr things that you wish you had available earlier in your career?

Well how old do you think I am?! [laughs]

As marketers we hope we’re students of human behavior and consumers of pop culture. Particularly when you’re talking about marketing a media property, you have to understand where your audience is and how they are receiving messages. As long as our audience is on Twitter and Facebook, we’re going to be there. That audience is also watching television, commuting, reading print media – our challenge is to be in all of those places in an ultimately cost-effective way.

Do you think the campaign you’re engaged in now is breaking new ground? Do you think that it’s something that people in your industry are going to remember?

Of course I hope so, but I really do think the property itself is so extraordinary, and that’s what sets the bar for us. But if we can entertain our audience in the service of giving them tune-in information, that’s great. 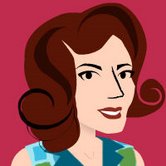 As senior vice president of marketing for AMC, Linda Schupack is responsible for the strategic oversight, management and implementation of network’s multiplatform consumer and trade marketing activities, including advertising campaigns and consumer and ad sales promotions.