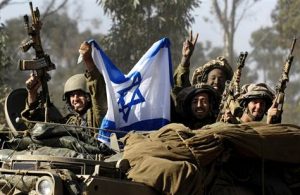 Israeli military officials said today that they killed four ISIS fighters via airstrike during a fight in the Golan Heights. This is believed to be the first time the forces of Israel and ISIS ever met directly in combat.

Lt. Col. Peter Lerner, an Israeli military spokesman, told news outlets that the conflict began when a reconnaissance unit came under attack by a group of militants riding in a vehicle with a mounted machine gun. No Israeli operatives were harmed in the gun fight that ensued, and the fighting ended when a warplane flew over and bombed the extremists’ car.

According to The Wall Street Journal, the militants were believed to be affiliated with Shuhada al-Yarmouk, a terror-supporting organization that was known to have pledged allegiance to the Islamic State. The group has been active along the Syrian borders in recent times, and it is believed that they were responsible for taking United Nations personnel hostage in the Philippines three years ago.

“I wish to praise IDF soldiers for thwarting an attack on our northern border,” said Prime Minister Benjamin Netanyahu. “We will not let Daesh elements or other hostile elements use the cover of the war in Syria to establish themselves next to our borders.”

As New York Times noted, Israel has tried to remain neutral when it comes to the Syrian civil war. Even so, there has been escalating violence recently on the border, and Israel has committed to operations against Hezbollah, which has provided aid to Syrian president Bashar al-Assad.