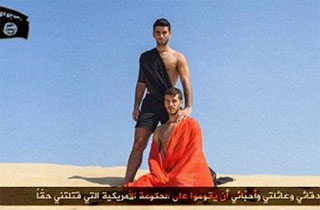 And there it is. An Israeli gay party promoter Went There and threw an ISIS-themed party in Tel Aviv last weekend, and to advertise it, used this image of some shirtless models re-enacting the beheadings of Western journalists.

Drek, a well-known gay party organizer according to YNet News, intended the party, called “Drekistan at the Haoman,” to be a “satire” of ISIS, “our way of showing our contempt of them and their videos”:

The organizers wrote “as the new Islamic State gains traction in the Middle East, we at Drek have decided to give in to Sharia law and cheer the stubborn Daesh,” using the Arab acronym for the group, and invoking a veiled play on words – “stubborn” in Hebrew can be written as “hard necked”, a reference to the group’s infamous executions.

Amiri Kalman, one of the Drek’s founders, said in response: “We are trying to react to current events. We have been doing it for a number of years. But we reject violence in any form and that includes the (execution) videos intended to scare the world.”

Drek removed the beheading photo after they were called out for bad taste, but retained the other one, which has another beautiful shirtless model waving a black flag evoking ISIS’s flag, just because:

#OnlyInIsrael: #TelAviv's gay party line is throwing ISIS theme party: "let's show ISIS what our ME is like" pic.twitter.com/Vb7BpmF276