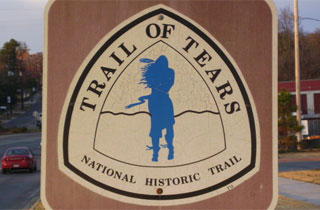 Which is a fair and good point to make, but maybe not by comparing it to a genocidal moment in American history:

Issa warned that the country’s democracy will only survive if a press is willing to undertake investigative reporting and work with whistleblowers, crediting journalists like Attkisson as the only way his committee “has been able to succeed at anything.”

“My committee is a desert island if not for a press that will look at something fairly, scrutinize it, but if they see a there, there, report it,” he said. “When an administration says ‘no,’ it’s no different than when Andrew Jackson marched Indians down the Trail of Tears, to their death.”

Issa, who is chairman of the House Oversight Committee, is an unlikely ally for Attkisson: the two have both pursued investigations against the Obama administration on many of the same scandals — Fast and Furious, Benghazi, etc. — to the point where people began accusing Attkisson of being an Issa mouthpiece. “Well if you know me at all, I ain’t nobody’s mouthpiece,” Attkisson said, defending her work while not comparing the White House’s actions to the forced relocation of Native Americans. “I’m not going to take that kind of criticism and let it steer me from the job at hand.”