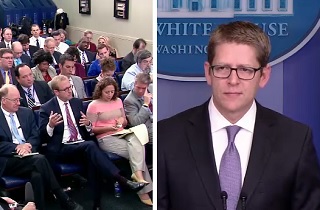 Television reporters were out of the dog house at Wednesday’s White House Daily Briefing, but not immune to the bite of White House Press Secretary Jay Carney. During an exchange about the then-unsolved problem of military death benefits being suspended during the government shutdown, Carney sank his teeth into ABC News Chief White House Correspondent Jonathan Karl for the second time in a week, accusing him of editorializing about the issue.

Earlier in the briefing, Carney told CNN’s Jim Acosta that “The president was very disturbed to learn of this problem and he directed the Department of Defense to work with the office of management and budget and his lawyers to develop a possible solution and he expects this to be fixed today,” but was unable to say precisely when the President learned of the problem. Karl and Carney started their exchange with a bit of a negotiation about the facts.

“On this question of families of those who have lost loved ones serving our country,” Karl began, “you said that the White House knew that this problem would be there in the event of the shutdown and…”

“The Department of Defense informed Congress, so Congress knew about it. Yes,” Carney interjected.

“Yes, so Congress knew about it, the White House knew about it,” Karl said. ” The President is the Commander-in-Chief, he’s the Chief Executive. Was there literally nothing that he could do to ensure that these families were taken care of?”

“He’s doing it today, Jon, because it was not addressed by Congress in the Pay Our Military Act,” Carney explained.

“Did he ask Congress to take care of it in the Pay Our Military Act? I mean, were there any discussions there?” Karl asked.

“Jon, the Republicans shut the government down. None of this would be an issue if the government were open,” Carney explained, and pointed out that Republicans in Congress were briefed, in detail, about all of the potential negative consequences of a government shutdown in advance of that shutdown. “I don’t think there’s any disagreement that this is a matter that needs to be resolved, that it’s unthinkable that these benefits would not be available,” he added, “And therefore, he’s doing the right thing as Commander-in-Chief and making sure that it’s resolved.”

“But what I don’t understand is, there’s discretion clearly in deciding who’s essential and who’s not essential, who’s furloughed and who’s not furloughed,” Karl persisted. “You’re here, these briefings are taking place. I mean, clearly, there’s decisions made. How could there not have been a decision made that if there’s anything that’s essential it would be taking care of those who lost loved ones in the field of battle?”

“And so the Department of Defense informed Congress that this would be a consequence, among many other consequences, and it wasn’t…” Carney said.

“But this wasn’t…” Karl interrupted.

Carney impatiently shot back “Well, Jon, look — I mean, again, if you want to editorialize — the Commander-in-Chief, when he found out that this was not addressed, he directed that a solution be found and we expect one today.”

“So he didn’t find out until yesterday that this wasn’t being addressed?” Karl asked.

“Again, I think I’ve been pretty clear about the process here,” Carney replied. “Congress was informed, as it was informed of all of the consequences of shutdown, and they are many, as we see. And a solution to all of this is not the piecemeal reaction to them or Band-Aid approach to solving them. It’s opening the government at funding levels Republicans set.”

He added, “Remember, if anybody thinks that Democrats in Congress are getting a concession by extending the government on a short-term continuing resolution at funding levels — sequester levels agreed to and celebrated by Republicans, they’re sorely mistaken. Leader Pelosi and Leader Reid deserve credit, and Democrats in the Senate and the House deserve credit that they agreed that it was too important not to shut the government down, they agreed to an extension at those levels. And unfortunately, Republicans instead decided to launch a quixotic crusade against Obamacare — one that everyone knew was going to lead to nothing, and everyone across the country who has even a tangential relationship with the government is suffering as a consequence.”

Here”s the clip, from The White House: