Jay Carney Zings Herman Cain And Congress’ 9% Approval: Not ‘The Kind Of Nine That They Want’ 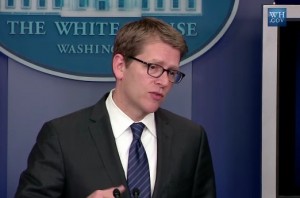 At Thursday’s White House briefing, Press Secretary Jay Carney zinged GOP runaway train Herman Cain and Congress (translation: Republicans) in one fell swoop. Referencing Congress’ all-time low 9% approval rating, Carney said, to laughs from the press corps,  “I know nine is a popular number in the Republican Party, but this can’t possibly be the kind of nine that they want.  Nine, nine, nine…nine.”

Carney was responding to a question about whether the President “going out there and providing pressure from the outside in is showing some results among the electorate?”

Here’s the exchange, via The White House:

Q I just want to clarify to understand. The President has been talking about the jobs act for about six weeks and been out there around the country. I just want to make sure I understand, you all believe there is evidence that going out there and providing pressure from the outside in is showing some results among the electorate?

Q I want to make sure what —

MR. CARNEY: Sure. I think so. There’s been polls that demonstrate that pretty significantly. I think another poll that shows how out of sync Republicans in Congress are with the mainstream is the recent one that showed a historic low — 9 percent approval rating for Congress. I mean, I know nine is a popular number in the Republican Party, but this can’t possibly be — (laughter) — the kind of nine that they want. Nine, nine, nine, nine. (Laughter.)

No, I think at some point — we think at some point, we certainly hope that the pressure that is mounting up there, out there, will be felt by members of Congress who seem to be content to deal with commemorative coins for Hall of Fame baseball players, which is something I support, but not ahead of creating jobs or growing the economy.

So yes, we believe there is progress being made.

Since unveiling his American Jobs Act in September, President Obama has seen little movement in his mid-forties approval rating, but polling on the provisions of his plan, and Americans’ perception that he is in their corner, demonstrate that Americans are getting the message, even if the Republicans in Congress aren’t. While the GOP technically only controls the House, they have more than enough members in the Senate, where 60 votes are required to overcome a filibuster, to block absolutely everything.

Elsewhere in the briefing, Carney pushed back on the idea that the Democrats couldn’t have passed the American Jobs Act in an up-or-down vote. Despite the fact that Sens. Jim Webb and Joe Lieberman claimed they would have voted the bill down (even though they voted to end the filibuster), Carney said, “it didn’t get that far.  Had it gotten that far, I am — we are absolutely confident that a majority — the majority of the United States Senate would support the American Jobs Act as a broad majority of the American people support it.”

Carney’s premise, apparently, is that while Webb and Lieberman have the luxury of saying that now, they would not have wanted to be the deciding votes that cut the measure down. There’s little advantage in accepting the political consequences of a vote you never had to cast.

It remains to be seen if pressure from constituents will have any effect on GOP lawmakers, but Carney’s quip sums up how the administration would like this election to go. While the President’s approval ratings remain married to the state of the economy, the White House hopes that the American people see that 9% and decide that they’ll stick with the guy who saved the patient from dying and made him a little better, rather than going back to the leeches and bloodletting.

Carney also corrected a misconception about the President’s current wave of Executive Orders. NBC News’ Mike Viqueira asked Carney, “What give the President the right to do this by executive order?”

Carney responded, “Where are you confused by — he’s not passing the American Jobs Act by executive…”

Viqueira said, “Well, he’s breaking out component parts, is he not?”

“No, he’s not,” Carney replied. “The executive actions are not pieces of the American Jobs Act.  The pieces of American Jobs Act are in legislative form because they require congressional action.  The things he is doing administratively through executive powers are things that he can do — the things that do not require legislative action — so he is exercising that power.”

Reporters also asked Carney about the President’s stance on Ohio’s SB-5, aka Question 2, which severely curtails collective bargaining rights for public employees. Carney didn’t have a specific answer during the briefing, citing the President’s broad support for union rights. Following the briefing, Carney asked the President about the measure, and added a note to the transcript, which read, expectedly, “The President doesn’t support the ballot initiative in Ohio that would strip away fundamental collective bargaining rights.”