Jay Leno Pulls A Cooks Source: Steals Taylor Swift Video From Internet; Claims It As His Own (UPDATE) 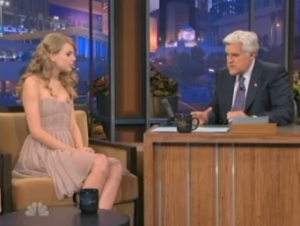 If you haven’t fallowed the massive plagiarism scandal involving a tiny Massachusetts magazine named Cooks Source and its editor that believed that everything on the Internet was public domain, click here and prepare to be outraged. If you have been following it, get ready to be outraged again as a similar scandal is brewing, this time with a much more visible villain: Jay Leno.

Last night on the Tonight Show, Leno played a version of a popular Internet video made by Rich Juzwiak and Kate Spencer for during an interview with Taylor Swift. Before the show, the producers promised Juzwiak that he and Spencer would receive credit, however, when the episode aired, they used a reedited version and Leno introduced it as something he and his staff “put together.” Juzwiak isn’t thrilled. And, like that, the Internet had a new reason to hate Jay Leno.

The video was originally made for VH1’s Fab Life blog. It’s a “supercut” (a video composed of a number of similar moments from different sources cut together) of all of Taylor Swift’s award show victory reactions, implying that the surprised face she uses for each one is at least a little phony. The video became very popular and currently has over 200,000 views. Last week, Juzwiak was contacted by a member of Leno’s staff about using it during an interview with Swift.

“Sean O’Rourke, a research coordinator for The Tonight Show with Jay Leno reached out to me for permission to show my Taylor Swift Is Surprised video during an upcoming sit-down interview with the pop star. ‘Duh! Squee! Duuuuuh!’ I said (not really, but I did go, ‘HA!’ in a quiet gym locker room when I initially read it off my Blackberry). ‘We’ll give you/blog credit,’ wrote Sean. Duh squared, that wasn’t even a concern. How silly I become when I’m excited! In my response, I stressed how important it was for my friend Kate Spencer (who came up with the idea for the video in the first place) to be credited, too. Kate and me/fourfour and The Fab Life/both attributions — however they wanted to do it, I asked that they somehow mention us both. Sean told me, ‘We’re going to put all this information into the notes for Jay. But I can’t make any promises about how specific he’ll get into the origin. But we will definitely credit you and your friend Kate in the credits so we atl east give you a written credit.’ Great!”

During last night’s interview with Swift, Leno actually spent quite a chunk of time setting up the video, discussing her awards show appearances, whatnot. However, when he actually got to the video, he introduced it only as something “we put together.” Not only that, it wasn’t the original video. It had clearly been reedited by the Tonight Show staff (Juzwiak assumes they did this so that they could use HD video instead of the compressed YouTube clips of the original). However, these were the same clips, in the same order, with the same intent. It is unclear if the original creator’s got notices in the credits as they have been left off the Hulu version of the episode.

I have no idea, but chances are good that this was nothing sinister by Leno. It’s doubtful he would have willfully snubbed the video’s creators. It was probably just some simple miscommunication. However, if the Cooks Source debacle and Leno’s already poor reputation amongst the Internet are anything to go on, it’s pretty easy to believe that the Tonight Show might have some pretty nasty PR coming their way.

Very few things inspire more passion than plagiarism. Cooks Source has now been forced out of business thanks to thousands of angry bloggers, Redditors, and the like swarming their Facebook page. And that was just some tiny magazine no one had heard of. This is Jay Leno. People already hate Jay Leno.

Of course, that might be the show’s saving grace in this situation. People who will read about this on various blogs already don’t watch Leno’s show. There’s really nothing else they can do to show their disapproval. The vast majority of people who watch the Tonight Show will probably never even hear of this situation no matter how big a deal it may become online.

Still though, Leno would probably be wise to throw a little mea culpa into tonight’s episode.

UPDATE: And, it looks like he’ll do just that.

“In the case of ‘Taylor Swift Is Surprised,’ Mr. Juzwiak said that he had been told by ‘The Tonight Show’ that he and Ms. Spencer would receive attribution on Tuesday for their contributions, an account that was confirmed by a press representative at NBC.”

Before that though, Spencer set out her opinion on the situation:

“Here’s the thing about the videos Rich creates: they aren’t just a bunch of clips cut, edited and throw up together in random order (though that alone requires a great deal of work). He presents a hypothesis that is examined and explored through out the piece using the clips, which are ordered very specifically and deliberately to explore and support his original claim.

But the larger problem is this general idea – especially, dare I say, amongst the olds – that if something is posted on the internet it’s fair game to rip it off and use it as your own without crediting the original source/creator. (See: the Cooks Source drama that went down earlier this month.) Creative content is creative content, and the creators deserve credit for their work. I love generating and sharing content on the web – it’s what I do for a living and am nerdily passionate about it – but there has to be some respect, especially from traditional media, for the work being presented online.”

UPDATE #2: At the end of the next show, the Tonight Show threw a big graphic up explaining that the Taylor Swift montage was “provided” by Juzwiak and Spencer. This was definitely the cleverest way to do it as, like I said, it’s something that no one who didn’t already know about the controversy would ever notice. On his blog, Juzwiak seems satisfied and profusely thanked everyone for their support.

Check out the segment in question from the Taylor Swift episode of Tonight Show on NBC. The original video is below that.