Jeb Bush Scuttles 2016 Chances by Endorsing Obama as ‘Our President’

Jeb Bush Scuttles 2016 Chances by Endorsing Obama as ‘Our President’ 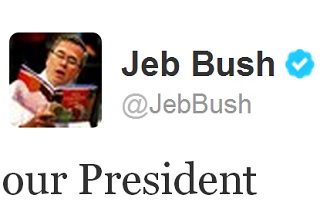 Former Governor Jeb Bush (R-FL) took a great big pandering swing at President Obama this week when he suggested that the decision to move the U.S. Embassy to the Holy See (The Vatican!) closer to the Vatican was actually some sort of retribution for Catholic opposition to the Women’s Preventive Care mandate in the Affordable Care Act. It was a noble, if ill-informed, attempt, but in the process, Bush may have done himself more harm than good with the very base voters he was trying to impress.

The ill-informed conservative freakout over the decision to move the US Embassy to the Vatican presented Jeb Bush with an opening into the hearts of GOP primary voters who have been torn between tea party faves and establishment candidates. Despite the fact that the new Vatican embassy will be closer to the actual Vatican, and the fact that it will be in its own building, with its own street address, and the fact that there will be no reduction in staff with the move, Bush joined other rabid Obama opponents in trashing the move, and added a nice little conspiracy twist. Like a true stranger in a strange land, though, Jeb made a costly error in speaking Nobamics:

Why would our President close our Embassy to the Vatican? Hopefully, it is not retribution for Catholic organizations opposing Obamacare.

“Our President,” Jeb? Really? Have you not been paying attention these past four years and change? Not only is President Obama not “our President,” he’s not even really President, or even American, let alone a full human being who was not born of a jackal. And what’s the big idea of using a capital “P” in President? You’re going to have to do much better than that. President Obama may be your President, Mr. Bush, but to the people who get diamond-hard nipples at the sound of Vatican-closing wingnuttery, he’s “Preezy.”