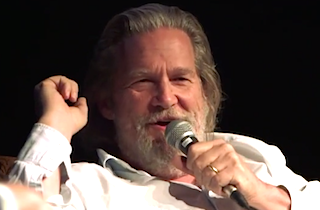 It’s been an astonishing 16 years since The Big Lebowski was released in an the time since its influence and reach has far exceeded the Coen brothers’ expectations. So when Jeff Bridges and his brother Beau Bridges sat down for a Q&A Monday night in Los Angeles following a screening of the new documentary Beau and Jeff: A Tale of Two Bridges, a major highlight was this story from the film’s set.

As Jeff Bridges, who played The Dude, told it, he decided that the shooting of the film’s Busby Berkeley-inspired dream sequence would be the perfect day to bring his wife and young girls to the set. But he didn’t realize that part of that scene included the moment that he drifted underneath the legs of the women with bowling pins on their heads.

Bridges, known for taking photographs on the sets of his films, decided to take some pictures during a run-through. “So I snap my camera and I say, ‘My God, that woman has huge tufts of hair coming out of her leotard,'” he recounted. “I mean, the pubes are just insane! And I got to the next one and they’re even more glorious.”

“Finally, I find out that the girls went to make-up man and shoved crepe hair into their leotards,” he revealed. “And thank God, they were all wearing merkins.”

Watch video below, via The Oscars:

And you can watch the finished product below, via YouTube: