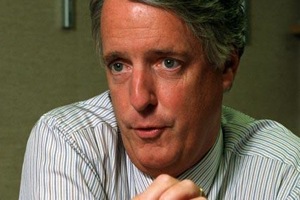 Joe McGinniss, the Sarah Palin biographer who found a convenient vacation spot in Wasilla, Alaska right next to the state’s former first family has come out to defend himself from allegations of taking his journalistic responsibilities a little too far. While he is still working on his book on the Palins, McGinniss notes that he “couldn’t care less” about the Palin children and is “very offended by the implication… that he would be peering in on the children.”

McGinniss gave an interview from the controversial home to the Washington Post‘s David Weigel, who won “Funnest Email Bag” for the week ending May 28 after defending McGinniss and calling Palin’s reaction to his move “strange, unprofessional, and paranoid.” Mostly, Weigel writes, McGinniss seems offended because he expected the Palins would be more open to talking:

“I would term this hysterical,” said McGinniss. “The mayor said to me, when I chatted with him in his office a couple of days ago, ‘You know, if Sarah had the brains that we like to think she has, Todd would have come back and said, do you know who’s living next door? This son of a bitch McGinniss who wrote that Portfolio piece. He’s writing a book about you. Sarah should have baked a plate of cookies, and come around the fence, and said hi, and laughed about this.’ I would have happily accepted a cookie, and then in my book I would have had a lovely scene about how gracious she had been.” McGinniss sighed. “She is, in many ways, a very gracious person.”

Instead, he relays later, Todd Palin came to visit him and told him that a piece he wrote critical of the Palins in Portfolio was “a bunch of lies” and “got increasingly hostile,” when the actual situation is that, he argues, McGinniss was given the property because the owner was certain that he would not be stalking the Palins the way, say, a National Enquirer reporter would. McGinniss also claims that he can’t hear anything happening on the property or see most of the land, and the last thing on his mind is writing minor details about the lives of the children:

“These little kids, I couldn’t care less about them,” said McGinniss. “I have my own kids and grandkids to care about. I don’t have any interest in Palin’s kids. I’m not going to write, oh, I saw Trig run across the lawn, and I saw someone else change his diaper. I haven’t been writing for 40 years to wind up on that level. I’m just very offended by this.”

Despite the ordeal and the insistence that he is not there to do any stalking, the interview ends with McGinniss admitting that the move at least taught him something about the Palins he didn’t know, which could be useful in the future for his career: “By being here I have learned things, and I’ve gotten an insight into her character, into her ability to incite hatred, that before I only knew about in the abstract.”

McGinniss told Weigel not to expect him to make the media rounds, but that he does have one interview planned on NBC’s Today Show next week. Since the interview dropped at 10:30 PM last night, the Palins have not yet responded, but we will be closely monitoring Facebook this Memorial Day weekend just in case.