John Kasich Doubles Down on Sexual Assault and Booze: ‘More Difficult For Justice to Be Rendered’ 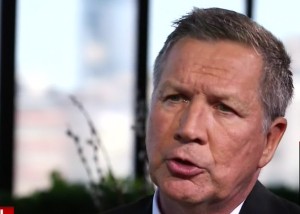 On Sunday morning’s edition of CNN’s State of the Union, Ohio Governor and Republican presidential hopeful John Kasich took a stab at fixing up his controversial remarks about young women avoiding parties with alcohol in order to prevent sexual assault. It didn’t go well, as Kasich tried to explain that the presence of alcohol at a party makes it “more difficult for justice to be rendered for a whole variety of reasons, adding “But we can still find a perpetrator.”

Kasich also bragged about the “lady attorney” who helped him reach out to college campuses, but apparently never let him borrow her 1953-to-English Dictionary. Host Dana Bash continued to press Kasich when he wondered why his position was such a big deal, explaining that telling women their credibility will be attacked if there’s alcohol around discourages reporting of sexual assault:

Bash: But you understand why a lot of people, women in particular, took that as, wow. he’s blaming the victim. Or he’s even giving some culpability to the victim.

Kasich: Actually, I don’t know how anybody would take it that way.

Bash: Because it’s taken a while to change the stigma of getting people to come out.

Kasich: Dana, I have led the way in the country to fight this and to get justice served in these conditions. I think even if, in fact, there is alcohol involved, you still have — you still can find the perpetrator. I just don’t want justice to be denied because something comes up that a prosecutor looks at it and says, well, I can’t figure this thing out.

Bash: Just to put a button on this and then we’ll move on. even if all of the mechanisms of justice are in place in a perfect way, if a young woman doesn’t feel like she can come forward because she’s at a party with alcohol —

Kasich: Oh, no, no. I don’t care if they’re at a party with alcohol. Just be careful. That’s what I would tell my daughters, be careful. But are you kidding me? Somebody gets sexually assaulted, of course we’re going to get to the bottom of it.

“I just don’t want justice to be denied because something comes up that a prosecutor looks at it and says, well, I can’t figure this thing out?” It sounds like maybe Kasich ought to tell his prosecutors to avoid parties with alcohol.