Jon Stewart Helping Code Pink Demand Release Of Drone Memos: ‘I’d Do Anything For A Vagina’ (UPDATED: It’s A Fake) 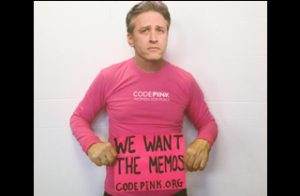 UPDATE: Comedy Central has confirmed that “this letter was absolutely not written by Jon Stewart.”

Code Pink, the “women for peace” protest movement that has recently been campaigning against the Obama administration’s secret drones program, has an unlikely ally in The Daily Show host Jon Stewart. While Stewart’s show is strongly political, like his colleague Stephen Colbert, he tends to avoid real-life forays into politics.

But evidently, the organization convinced Stewart to write the letter below, sent out to their email list today, urging members to contact Senate Judiciary Committee chair Patrick Leahy and demand he release the classified drone memos.

I like the president, but if he’s going to claim the right to kill me with a flying robot, don’t I at least deserve to know why?

Last week, we did a segment on The Daily Show about President Obama’s refusal to release the classified memos justifying his use of killer drones. Now, I’ve always said that I’m a comedian, even after my role in Big Daddy. But this story got me thinking a little more seriously.

Then I got a call from my friend Medea Benjamin, cofounder of CODEPINK. She saw that my correspondent Aasif Mandvi had the memos and wanted us to release them. But ever since he read them, Aasif’s been too scared to come out from under his desk. So Medea asked me to join her in demanding that Congress do something. Naturally, I said no. I’m a comedian, not an activist. But then she said I could have one of the giant vaginas she sometimes wears and I said “absolutely.” As a virile man, I’d do anything for a vagina.

So join me in calling on Patrick Leahy – the big, bald-headed Democrat who heads the Senate Judiciary Committee – to get his hands on those drone memos. If he does, he’ll be doing a public service. And he can have my vagina.

While Stewart did go after the Obama administration for withholding the memos last week during the segment he describes in the letter, he has not always been a fan of Code Pink.

In September 2007, he presented an installment of a recurring segment titled “You’re Not Helping” aimed at Code Pink’s interruptions of General David Petraeus’ Iraq hearings. Stewart compared one Code Pink protester’s incoherent screaming to the violent outbursts of the late comedian Sam Kinison.

Watch video below, via Comedy Central