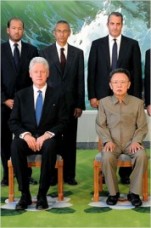 For all the fuss that was made about former President Bill Clinton‘s trip to North Korea being a private one, whose sole intention was to rescue journalists Laura Ling and Euna Lee, it has certainly provided the U.S. government with a lot of information that, up until now, has been nearly impossible to come by. Says the Times:

For all the billions of dollars a year that the United States spends on intelligence gathering about mysterious and unpredictable countries like North Korea, it took just 20 hours on the ground in Pyongyang by a former president to give the Obama administration its first detailed look into a nuclear-armed regime that looms as one of its greatest foreign threats.

Clinton visited the White House yesterday to share his impressions of North Korea with President Obama. The Times has subsequently gotten most of the back story and trip details in an article, which sounds like the premise of a John LeCarre novel. It’s a fascinating piece and and well worth your time; it’s hard to imagine that this won’t eventually find it’s way to the silver screen — is Brad Pitt old enough to play the President yet? Matt Damon could probably swing Joseph R. DeTrani the “high-level American intelligence officer who spent much of his career trying to unlock the mysteries of North Korea,” who was mostly responsible for organizing the trip.

The article also mostly succeeds in putting to rest the idea that Clinton’s trip was merely about rescuing Ling and Lee (whose presence there still has yet to be explained). In fact, it becomes increasingly clear as more details emerge that the timing of the whole debacle could not have been more advantageous for all parties, most of the all the U.S. government who now finds itself on the receiving end of a bonanza of information they were otherwise only able to guess at. Needless to say, it wasn’t too bad for Bill Clinton’s image either.