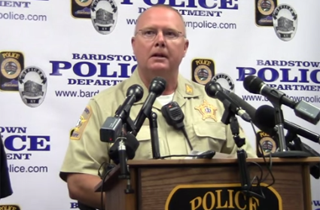 A Kentucky sheriff was relieved that a guy shot by a one of his officers happened to be white. While this is probably a sentiment felt by many sheriffs throughout the country at this moment, he unfortunately said this in a press conference.

“We are glad that he is white, and we shouldn’t have to be worried about that,” Nelson County Sheriff Ed Mattingly told reporters while briefing them on a recent violent car chase, in which a man suspected of stealing a car managed to destroy numerous police vehicles before being shot and taken down. “And we do not want any backlash or violence in this community because people have been misinformed. I think that the public needs to know how the criminal justice system works and… what officers are able to do.”

“We must take notice of previous cases and how the media has handled those situations,” he added. “We want the public to be informed and accurately informed. We do not want trouble.”

In expressing relief that he wasn’t about to end up with a Baltimore or a Ferguson or an Eric Garner, Mattingly walked right into a somewhat offensive situation — one that he now regrets, as he told the Huffington Post:

…Mattingly said he’d received some calls from people who were upset about his remarks. He said he was surprised that people had gotten so worked up, and added that he wasn’t sure how his community or the media might have reacted if Fenwick had not been white.

“I don’t want what has happened in these other communities to happen here. I don’t have a magic eight ball to predict the future, I just don’t want that to happen,” he said. “Some people took that comment as being racist, and I had no intention of that coming across that way and I’m sorry if that comment bothered some people.”