A few days ago, Kentucky voters received this official-looking envelope in the mail, which is enough to make anyone think that they’re actually committing election fraud: 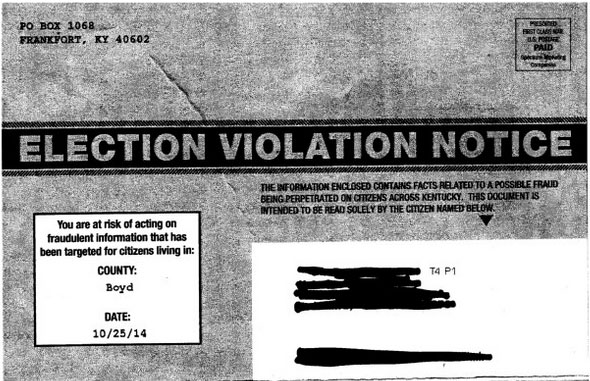 Until they opened up the envelope which, according to Talking Points Memo, revealed that the mailer was paid for by the Republican Party of Kentucky on behalf of Sen. Mitch McConnell, and has the following letter inside:

This document serves as a notification to you, as a resident of Kentucky and a registered voter in the aforementioned commonwealth, of

fraudulent information that is being deliberately spread to voters in your area.

The information that has been red-flagged as 100% false is being purposely spread by the campaign of the federal candidate named below:

With the campaign for United States Senate nearly complete, Alison Lundergan Grimes has chosen to launch an advertising campaign that independent sources prove is

Kentucky Democrats are furious at the mailers, calling their use an example of “questionable and possibly illegal voter suppression tactics,” Kentucky Democratic Party Chair Dan Logsdon said in a statement to Talking Points Memo. “The despicable mailers targeting Kentucky voters with misleading information are just another sign of Mitch McConnell’s desperation as Kentuckians hold him accountable for his 30-year failed record in Washington.”