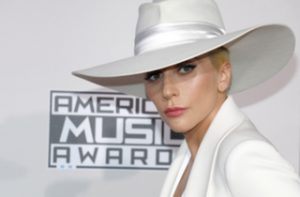 If you were expecting Lady Gaga to get political during this year’s Super Bowl halftime show, think again. According to a report from Entertainment Tonight, a source close to the halftime show says the singer “was told by the NFL that she cannot say anything or bring anything up about the election, or mention Donald Trump.”

Gaga’s feelings on the President-Elect are pretty clear. Just before the election, she called Trump “one of the most notorious bullies we have ever witnessed,” and for a brief time her name on Twitter was #VoteHillary. After the election, she stood outside Trump Tower with a sign that said “Love Trumps Hate”:

??❤️I want to live in a #CountryOfKindness #LoveTrumpsHate He divided us so carelessly. Let’s take care now of each other.

The “Joanne” singer has been documenting some of her rehearsals for the event on her social media, including revealing to her fans that she built a tent in her backyard with a dance floor to practice on. Even without politics, a Lady Gaga show is always a happening. It’s going to be big.

SuperBowl Rehearsal is so fun. We built a tent in my backyard with a dancefloor to practice! We love you monsters, can’t wait to perform for u! ?❤️?