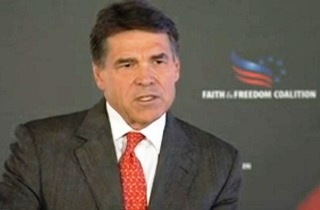 The former Republican presidential candidate who couldn’t remember a list of three things (not to be confused with the vice-presidential candidate who needed to write the list on her hand) managed to forget a list of one thing on Saturday. Speaking at the Faith and Family Coalition conference, Texas Governor Rick Perry (R-OOPS) was solemnly addressing the crowd on matters of deep concern to him, when he lamented that ““I fear where we’ve come to in America, where our administration won’t make one phone call to save our men and women in a embassy in Lebanon.”

To a smattering of applause, he added, “But they’ll sure monitor phone calls of 121 million Americans with a secret judicial order.”

As it happens, both ends of that couplet are pure fantasy. The embassy he’s referring to is, of course, in Benghazi, Libya, and as the Republicans’ own whistleblower testified, there was no possibility of a phone call that would have altered the outcome of the attack he’s setting up his joke with. As for the NSA program he’s referencing, no phone calls were “monitored,” but rather, data on phone calls was collected. Still, it was a funny bit, worthy of Jay Leno. Perry also now has the distinction of bringing to life a recent poll, which showed that 39% of the people who think Benghazi is the biggest scandal ever, don’t know where Benghazi is. Even in that poll, Lebanon didn’t make the top seven guesses.

Ironically, Perry wound up his speech by quoting former President Ronald Reagan, who actually did preside over a terrorist attack in Lebanon, and chose the perfect one.

“Smile when you disagree with a liberal,” Gov. Perry said.  “Shake your head as Ronald Reagan once said, he said you know, liberals know so much that isn’t so.”