A Tale Of Two Governors: What Rick Perry Needs To Learn From Jan Brewer, And Quick
Column

A Tale Of Two Governors: What Rick Perry Needs To Learn From Jan Brewer, And Quick 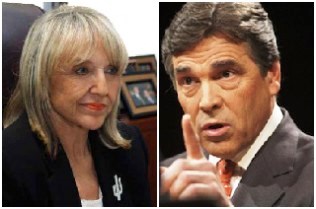 Jan Brewer and Rick Perry are both governors of solid red south/southwestern states, known for their uncompromising conservatism and their stalwart opposition to federal intervention, real or imagined. And both have gone on a recent veto binge, with Brewer axing a whole slate of bills two weeks ago and Perry 86ing more than two dozen pieces of legislation yesterday.

But that’s where the similarities end. Brewer issued the vetoes to make good on a bluff that no bill would be signed until the Arizona legislature passed a budget containing the expansion of Medicaid encouraged under the Affordable Care Act. Aggressiveness is not unexpected from Brewer, but her supporters are used to seeing it directed at President Obama rather than members of her own party. They didn’t like being on the receiving end: the governor has been branded a socialist, a Judas, and a RINO squish for midwifing Democratic legislation in Arizona.

Perry, on the other hand, slew his legislature’s bills out of sheer ideological calcification, eliminating an Equal Pay Act for women, returning control over the UT system to the Perry-controlled regents, and defunding ethics prosecutors who have been a thorn in the side of Texas Republicans. (Credit where credit’s due: he did save Christmas.) Perry, of course, has petulantly refused federal funds for Medicaid expansion, stating “even $1 in the name of ‘Obamacare’ was a dollar too much,” a move that will deprive 1.5 million Texans of health care. As a reward for this ideological starch, the erstwhile 2012 Republican savior remains a central figure of the conservative movement, with a featured speaking spot just this morning at Ralph Reed’s Faith and Freedom Coalition conference. (He killed.)

This sudden parting of two otherwise indistinguishable governors highlights a significant problem facing the GOP as it becomes a party dominant in state legislatures and governors’ mansions but impotent on the national scene. No matter how fervently Republicans run on a government-is-the-problem platform, once in power they nonetheless must govern. And while a rigid ideology can appear like a strong backbone during a campaign, it’s markedly less useful when it comes to negotiating the shifting demands of crafting and implementing policy.

The Equal Pay Act that Perry vetoed is a prime example. Modeled on similar legislation enacted in forty-two other states, the bill passed both chambers of the Texas Capitol, no small feat for a heavily conservative legislature that meets once every Dale Watson album. The governor’s argument against the popular bill was limited entirely to resisting bureaucratic waste: Perry claimed the legislation was a duplication of the federal Lilly Ledbetter Act, signed by Obama in early 2009, and thus extraneous law.

This is mendacious: the Texas version allows women to file grievances in state as opposed to federal court, making legal recourse considerably more accessible to plaintiffs. Such a bill is an obvious elaboration on and improvement of the federal legislation, and the kind of federal/state interplay indicative of functional policy. Perry’s logic in vetoing it is so inadequate it doesn’t even make sense within the narrow confines of his own ideology. He is using his federalism now less as a bludgeon than a cloak, less to effect conservative policy than to obscure it.

Perry’s veto couldn’t possibly contrast more starkly with those handed down by Brewer, which prioritized constituents’ health over ideological loyalties. No one doubts that Brewer despises the ACA—in fact, she joined a lawsuit in 2010 challenging the constitutionality of the individual mandate—and no one, save for the most unforgiving conservatives, will put a (D) after her name for supporting Medicaid.

But when it came to governing, Brewer sided with what would help her constituents the most. It didn’t get her a speaking spot at the Christian Coalition 2.0, but as Ed Kilgore pointed out, “300,000 Arizonans who will (unless the expansion is somehow reversed) now qualify for health care coverage will benefit from her defiance of the almighty ‘base.'”

Her decision will do more than help mend fences with the many enemies Brewer has made in her state, endear her to the changing demographics that threaten the GOP’s stranglehold on both Arizona and Texas, or make the Republican Party more viable nationally. It will remind the GOP that no matter how much “government” in the abstract may be an enemy, government in the real is a practice, one requiring much more than ideological grit to execute well. Try as he might, Rick Perry can’t veto that.