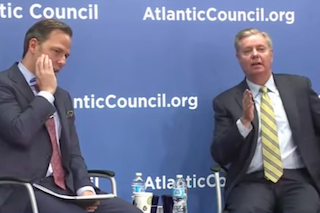 During a Q&A session with CNN’s Jake Tapper at the Atlantic Council on Wednesday, Sen. Lindsey Graham (R-SC) was confronted by Code Pink activist Medea Benjamin who said she was “horrified” by his foreign policy because it’s a “prescription for endless war.” In return, Graham told her that Code Pink represents “radical Islam’s best hope.”

Benjamin was supposed to be asking the Republican presidential candidate a question, but instead held onto the microphone for more than two minutes before security escorted her out of the room. While she still had the floor, Benjamin implored Graham to speak out against beheadings in Saudi Arabia and the Israel’s “repression” of the Palestinians, among other issues.

“Is there a question?” an uncomfortable-looking Tapper asked as Graham chuckled to himself and rubbed his eyes.

“I’m going to put her down as undecided,” Graham joked after Benjamin’s mic had been taken away. While he said he respected her right to express her opinion, the senator said, “I couldn’t disagree with you more.”

I asked @LindseyGrahamSC if Israel has nuclear weapons and should just NPT. He didn't answer. #ACStrategy

I asked @LindseyGrahamSC to speak out against Saudi invasion of #Yemen He didn't. #ACStrategy

I asked @LindseyGrahamSC to criticize Saudi beheadings. He didn't. #ACStrategy

I asked @LindseyGrahamSC to criticize Saudi crushing of #Bahrain uprising. He didn't. #ACStrategy

Watch video below, via Atlantic Council: