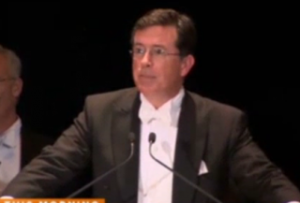 Late night host Stephen Colbert spoke at the Al Smith Dinner in New York last night, and summarily roasted everyone from Mayor Michael Bloomberg to Henry Kissinger to, yes, even Pope Francis himself. A fair portion of Colbert’s roast addressed his Catholicism, he even introduced himself as “America’s most favorite Catholic.”

Though with Cardinal Timothy Dolan a few feet away, he added, “I’m sure the Cardinal is thinking, ‘Stephen, pride is a sin.’ Well Cardinal, so is envy, so we’re even.”

He noted how the Al Smith Dinner is one of the biggest “rituals” of American politics, aside from “the Republicans sacrificing 2014 to Ted Cruz‘s ego.” Colbert thanked Dolan and said he has great respect for him, though it’s hard for him when he’s wearing an outfit that makes him look like “a matador who’s really let himself go.”

Colbert also joked about the rather humble leader of the Catholic Church, Pope Francis.

“I believe the Pope is infallible, but he’s also wrong about a lot of things… If Pope Francis were throwing tonight’s party, we wouldn’t be at white tie and the Waldorf, we’d be in sweatpants crammed in the corner booth of the IHOP splitting a Rooty Tooty Fresh ‘N Fruity.”

Colbert also poked fun at Chris Matthews, telling the MSNBC host that “having ‘Hardball’ is now covered by Obamacare,” and failed New York mayoral candidate Christine Quinn, saying “New York City is the only place in the world where the lesbian candidate is too conservative.”

And, of course, Colbert couldn’t resist getting in some cracks at Michael Bloomberg. He explained the only reason New York’s outgoing mayor is trying to ban large sodas is because “he’s afraid he might drown in one.”

Full video of Colbert’s roast is not available yet, but you can listen to the audio here, via Whispers in the Loggia: