Lord of the Flip-Flops: President Trump’s 84 Days of Policy Reversals 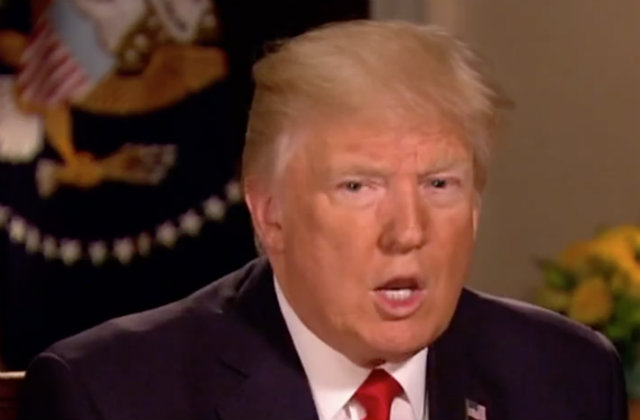 During the 2004 presidential race, the “flip-flop” term stuck to Democrat John Kerry, after a series of policy reversals. Most infamously, Kerry stated, “I actually did vote for the $87 billion before I voted against it.” Republican activists even hounded the politician by clapping plastic flip-flops at campaign events.

Over a decade later, Kerry’s behavior now pales in comparison to Donald Trump, who has spent the first 84 days of his presidency reversing his own positions from the presidential race.

The warning signs came even before Trump took the oath of office. The billionaire had pledged to prosecute, or even “jail” Hillary Clinton on the campaign trail. Days after he won the election, CBS asked Mr. Trump about the issue. He replied, “I don’t want to hurt them.”

During the week of his inauguration, Trump renewed his campaign promise to move the U.S. embassy in Israel from Tel Aviv to Jerusalem. However, just days later, during an interview with Fox News’s Sean Hannity, the President punted on the issue: “I don’t want to talk about it yet. It’s too early.”

These early flip-flops were just a taste of what would come this week.

Early in his campaign, the billionaire candidate slammed the Export-Import Bank as “something that benefits just politicians and a ‘few companies.'” He claimed that the U.S. could “do well without it.”

The President reversed himself on that too, Wednesday, revealing to the Wall Street Journal that he would fill vacancies on the bank’s board. This came less than 24 hours after he met with the former CEO of Boeing, which is one of the main beneficiaries of the federal agency. Conservative groups rightfully criticized this flip-flop as a “bad deal for hardworking taxpayers and a bad deal for American businesses.”

Later in 2015, Trump vowed that “on day one of a Trump administration, the U.S. Treasury Department will designate China a currency manipulator.” This, of course, didn’t happen. Now, the politician denies that the Communist country is even engaged in such activity: “They’re not currency manipulators.”

Days before the inauguration, President-Elect Trump played up his skepticism of NATO from the campaign: “I took such heat when I said NATO was obsolete. It’s obsolete because it wasn’t taking care of terror. I took a lot of heat for two days. And then they started saying, ‘Trump is right.'”

Less than three months later, the chief executive is singing a different tune about the alliance. He revealed during a Wednesday presser with the NATO secretary general, “I complained about that a long time ago and they made a change, and now they do fight terrorism. I said it was obsolete. It’s no longer obsolete.”

Last week, the President, of course, shifted course on Syria when he ordered the missile strikes on an Assad regime airfield. Prior to launching his presidential campaign, in June 2013, The Apprentice star Tweeted, “We should stay the hell out of Syria, the ‘rebels’ are just as bad as the current regime.”

There was another policy reversal that Trump unrolled on Wednesday via an underling. Mick Mulvaney, the director of the Office of Management and Budget, disclosed on MSNBC’s Morning Joe that the Trump administration’s early federal hiring freeze was coming to an end. This move breaks a major campaign promise that was part of the President’s “Contract With The American Voter.”

On Wednesday, Ed Straker of the conservative American Thinker blog zeroed in on these recent flip-flops, and asserted that “Trump is unmoored by any political belief system. He’s like an army tank that can be driven in any direction.”

Straker concluded, “When you combine a lack of belief system with government by nepotism, this is what you get. The only thing that surprises me is people who are surprised by this.”

One wonders how many Trump supporters will become disillusioned by these moves, or if the President’s successful nomination of Justice Neil Gorsuch will be enough to keep enough of them in his camp for the next three-plus years.