Maddow To The Olympics? Find Out Why One Group Wants MSNBC Host Reporting From Russia

Maddow To The Olympics? Find Out Why One Group Wants MSNBC Host Reporting From Russia 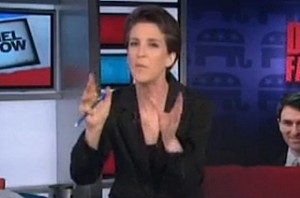 There is growing concern over the safety and security of gay tourists coming to Sochi, Russia next year for the 2014 Winter Olympics due to Russia’s strict anti-gay laws. Last week the Human Rights Campaign requested NBC use its platform to draw attention to those laws, and now the group Truth Wins out has someone in mind for the job: openly gay MSNBC host Rachel Maddow.

LGBT groups are hoping that NBC, with its exclusive rights to cover the Olympics, will spotlight these anti-gay laws at some point during the big games, and a Change.org petition started by Truth Wins Out wants Maddow to lead the charge.

NBC’s Olympic coverage has long featured myriad human interest pieces, about the athletes competing, and about all aspects of life in the home nation. There is more than enough time in prime time Olympic coverage for hard-hitting pieces exposing the reality of what LGBT people, political dissidents and other minorities face every day under the Putin regime.

Rachel Maddow is one of the most respected television journalists in the United States, with a reputation for being thorough, fair, informative and entertaining. Rachel has the expertise and the instincts to tell this full story to a viewing audience who are appalled by the treatment of their Russian brothers and sisters.

Would you tune into the Olympics if Maddow was involved in the team coverage?