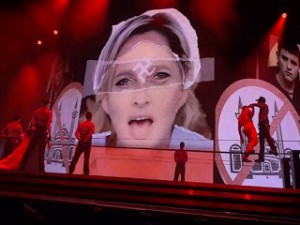 Billboard reports that the “Queen of Pop” Madonna has come under legal fire in France for screening a controversial made-for-concert video involving one of France’s most popular right-wing politicians.

The concert video features a variety of public figures like the Pope, but the outcry is specifically related to an image shown of Front National (FN) leader Marine Le Pen with a swastika superimposed on her forehead. After a few seconds, the picture then cuts to reveal an Adolf Hitler look-alike.

Madonna originally screened the video at her concert in Tel Aviv, where it first triggered the FN to lash out at the singer. Le Pen personally threatened Madonna by announcing that “if she does that in France, [they would] be waiting for her.”

So then Madonna screened it in front of 70,000 attendees at her Stade de France concert just north of Paris.

Le Pen’s team says the case will be taken to the Paris courts within a few days. There is still no word on how much Le Pen will seek in damages, though the politician’s father, Jean-Marie Le Pen, recommended that Madonna and her team pay $1-million to his daughter.

But not everyone believes the video is offensive. French anti-racism group SOS Racisme has declared that the video was “resolutely anti-rascist and feminist.” They argue that it represents the fight against discrimination.

The FN has been known for anti-Semitic and racist leanings in the past, but Marine Le Pen has tried to gradually diverge the FN away from that image. As a result, the party won over 20% of votes in the first round of France’s most recent presidential election and made Le Pen a political star in the country.

Watch the video below, courtesy of Billboard: