David (Shuster) And Goliath: Underdog Has Its Day With SCOTUS Mandate Decision 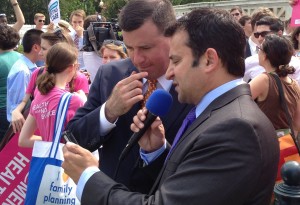 One of the biggest media stories of the year was the mainstream media’s coverage of the Supreme Court‘s decision on President Obama’s Affordable Care Act, wherein two of the three major cable nets blew the call. In a recent column, GWU Professor Amos Gelb noted that, along with the newly-celebrated SCOTUSBlog, cable news vet David Shuster‘s Take Action News, and little radio station that could We Act radio, outclassed the legacy media competition by nailing the decision, and reaping huge numbers in the process. While Prof. Gelb casts this as an old vs. new media event, there may have been an even more relevant factor at work.

While Fox News and CNN were falsely reporting that the individual mandate provision of the Affordable Care Act had been struck down, this was what viewers of Shuster’s Take Action News saw:

Professor Gelb is right that the debacle was a black eye for cable news, but new media reporting is often no better, as illustrated by the fact that Mediabistro gossip blog FishbowlDC mistook Mark Levine, host of the Inside Scoop and Shuster’s broadcast partner for the coverage, for “an inattentive guest who kept checking his cell phone,” and they had five hours to check that.

If there’s a common thread between the outlets who got it right (excluding SCOTUSblog, which has no competing priorities), like Shuster’s venture and MSNBC (who waited the four minutes necessary to get it right), it’s that they’re progressive, and thus, have an unapologetic emotional connection to the news.

In Shuster’s case, that connection paid off with an online audience (of 131,000) that eclipsed the coverage of cable channels like CNBC, Bloomberg, and Fox Business News. Shuster also says they’re “altering the talk radio landscape.”

“Most conservative and progressive talk radio is primarily just that,” he told me via email, “bloviated opinion and whacky viewer calls. We’ve established that credible reporting, in an extended format, will also get a big radio audience.” 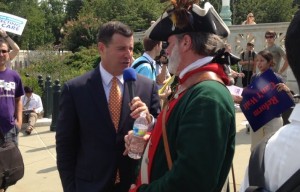 It took more than a bleeding heart and a webcam to pull off Take Action News‘ coverage of the SCOTUS decision. Without the equipment and resources of their TV competitors, Shuster and co. had some unique challenges to overcome. The night before the decision, they set up some chairs, stools, and an astroturf carpet for the next day, which Shuster left in the care of some spectators who were camping out when Capitol Police insisted someone had to stay with the equipment.

The following morning, TAN‘s MacGyver setup almost morphed into a MacGruber sketch when Executive Producer Daniel Marans and program director Pete Callahan set out (at 3 am) to procure a massive generator to power their equipment (most TV outlets use massive cable throws from remote trucks).

The urbanely-attired duo, fish out of water at the remote Laurel, MD heavy equipment rental depot, managed to load the massive generator with some difficulty. After nearly destroying the interior of their rental SUV loading the generator, “we noticed that gas was leaking out of the bottom of the generator,” Marans says.

Marans continued, “‘Is that normal?’ I asked Pete. ‘No, I don’t think so,’ he said. We had the rental warehouse worker guy look at it one last time and he closed the gas valve on the bottom. ‘Whoops. That wasn’t supposed to be open,’ he said as he lifted a small switch underneath the hulking generator. Great, I’m thinking, so we might have been incinerated before the coverage even started.”

While Marans and Callahan were narrowly avoiding immolation, Shuster was busy schmoozing the police and warding off belly-dancing protesters. “The Capitol Hill police at the Supreme Court were not too keen on a gigantic power generator directly across from the capitol building with a news team they had never heard of,” Shuster says. “Furthermore, the cops also didn’t understand why we weren’t setting up in the traditional ‘reporters pen’ on the other side of the plaza,” which, he explains, was so they could “be with the crowds.”

“So, it took some soothing/polite conversations with all of the police to let us set up where we did and convince them the generator was not a subversive threat,” Shuster says, adding that “We were helped by the fact that the lieutenant in charge came over and said he knew me from MSNBC, and was somewhat amused that I was doing some kind of ‘new venture.’ (I got the sense he hated MSNBC’s political leanings.) So with a bit of a scowl, he let us set up where we were and use the generator.”

A few minutes before air, David says, “a group of protestors dressed as a belly dancing troupe arrived near us on the plaza. They were mocking the health care act, I think. In any case, their loud bullhorn and belly dance cymbals made quite a racket.”

So, he did what any self-respecting new media journalist would do. “I suggested to the lead belly dancer that if her group wanted some press attention, they should do their routine behind the networks on the other side of the plaza,” Shuster says, and off they went to annoy the big kids.

The rest, as they say, is history.

While the David Shuster media empire is still in its infancy, his passion and hard work are beginning to pay off. Take Action News is now syndicated in three markets (including Chicago, where they’re up 150% from their predecessor programming, plus a progressive Oklahoma country music station that received overwhelming listener response, and Columbus, OH), in addition to their Washington, DC home base, and they’re in talks to syndicate to Boston and Minneapolis.

We Act radio, meanwhile, continues to grow, building on the success of its star investor. In Deep with Angie Coiro airs in three markets DC, WPWC; Monterey, CA, KRXA and Redding, CA, KKRN, while Kymone Freeman‘s show SpeakEasy is being simulcast on local cable television. They’ve also launched new programs like MomsRising Radio with Kristin Rowe-Finkbeiner, which leverages a blog network that can reach an estimated 3 million people, AlterNet Radio with Joshua Holland, and labor-focused The Union Edge with Charles Showalter.

The heart of Shuster’s work with We Act, though, is servicing the Southeast DC community in which they reside, and on that count, the station is making a difference, forming a partnership with Public Allies to hire 25 successful candidates from the local Anacostia community for their paid summer internship program. With Social Art and Culture, a local non-profit, We Act has also co-founded a broadcast training program to highlight the educational components of the station designed for young people to learn the craft of broadcasting, media training, and production, a pilot program which was funded by the DC Summer Youth program.

“The point,” Shuster explains, “is that a new talk radio format is emerging that dovetails with what a lot of folks are looking for on-line — compelling, credible, explanatory broadcast reporting… in real time.”

“Oh, and we are also doing it from a station that serves an underserved audience — east of the Anacostia river. And, the programming is being built by progressives.”