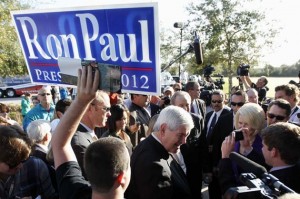 A man who brought a Rep. Ron Paul sign to a Newt Gingrich rally is now suing the former House Speaker and his security team for, among other things, assault. Eddie Dillard, it was reported last week, arrived at a Gingrich event in Florida and was deemed to be too close to the stage where Gingrich was speaking, sporting a “Ron Paul” sign. He told reporter campaign security staff told the crowd to step on his toes.

TMZ now reports that a lawsuit has been filed on the matter, as Dillard argues that he was near a polling place when the Gingriches arrived, and that he now has a fractured foot thanks to being stomped on intentionally by campaign security:

Dillard claims Newt then noticed his Ron Paul t-shirt and “immediately turned his back” to him and went on to greet other people. That’s when Dillard claims several of Gingrich’s security team came up to him and tried to “intimidate him into moving from the spot.”

Dillard — who says he was wearing open-toed sandals — then claims one of the agents “lifted his heeled shoe over Dillard’s right foot and dug the back of it into his skin, twisting it side-to-side like he was stomping out a cigarette, causing a fracture to Dillard’s right foot.”

While it is uncertain what sort of relief the civil suit demands, TMZ notes that the campaign has not commented and that assault and battery are the charges for which he is seeking redress.