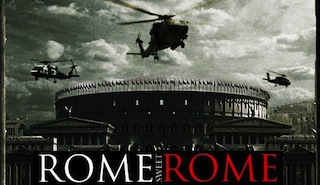 Recently, there’ve been a lot of negative stories going around about the social link-sharing website Reddit and it feels like it’s been way too long since we had a genuinely good one. Today, though, we got a doozy. One month ago, a Redditor asked a simple hypothetical (“Could I destroy the entire Roman Empire during the reign of Augustus if I traveled back in time with a modern U.S. Marine infantry battalion or MEU?”) and it caught another user’s interest. That user, James Erwin, began writing a narrative using that scenario, it quickly went viral, and now he’s gotten himself a damn movie deal!

It all started when Erwin, a two-time Jeopardy champion from Iowa, posted this, the first part of a book:

“DAY 1 The 35th MEU is on the ground at Kabul, preparing to deploy to southern Afghanistan. Suddenly, it vanishes.
The section of Bagram where the 35th was gathered suddenly reappears in a field outside Rome, on the west bank of the Tiber River. Without substantially prepared ground under it, the concrete begins sinking into the marshy ground and cracking. Colonel Miles Nelson orders his men to regroup near the vehicle depot – nearly all of the MEU’s vehicles are still stripped for air transport. He orders all helicopters airborne, believing the MEU is trapped in an earthquake.
Nelson’s men soon report a complete loss of all communications, including GPS and satellite radio. Nelson now believes something more terrible has occurred – a nuclear war and EMP which has left his unit completely isolated. Only a few men have realized that the rest of Bagram has vanished, but that will soon become apparent as the transport helos begin circling the 35th’s location.
Within an hour, the 2,200 Marines have regrouped, stunned. They are not the only moderns transported to Rome. With them are about 150 Air Force maintenance and repair specialists. There are about 60 Afghan Army soldiers, mostly the MEU’s interpreters and liaisons. There are also 15 U.S. civilian contractors and one man, Frank Delacroix, who has spoken to no one but Colonel Nelson.
Miraculously, no one was killed during the earthquake but several dozen people were injured, some seriously. All fixed-wing aircraft and the attack helicopters were rendered inoperable by the shifting concrete, although the MEU did not lose a single vehicle or transport helicopter.
As night falls, the MEU has established a perimeter. A few locals have been spotted, but in the chaos no one has yet established contact. Nelson and his men, who are crippled without mapping software and GPS to fix their position, begin attempting to fix their location by observing stars. The night is cloudy. Nelson orders four helicopters back into the air at first light, to travel along the river in hopes of locating a settlement.”

For the next few week, Erwin wrote a little more each day. Redditors quickly fell in love with the story, so much so that they created a whole Subreddit (one of the many individual boards that Reddit uses to categorize posts) for him to encourage him to continue. And continue he did. Fans got to watch in real time as the story was crafted before their own eyes, seeing Erwin fix elements he’d changed his mind about and use the site to ask actual Marines for help with details.

Really though, I think we’re all just hoping some movie execs hit up the Mediaite comments section. Obviously Commie Fascist: All You A**holes Are Wrong would make an excellent summer blockbuster.

UPDATE: It turns out that are some movies based on the Mediaite comments section. Check them out here.