Marco Rubio Blasts Conservative Immigration Study: ‘The Folks Described In That Report Are My Family’ 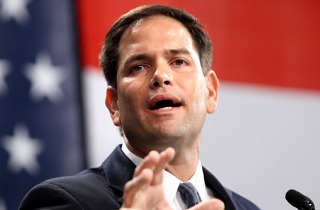 The Heritage Foundation’s recent immigration study, claiming that the Gang of Eight’s reform bill will cost $6.3 trillion, has found little support, even among the conservative press.

Now it has a new enemy: Marco Rubio.

Rubio, who coauthored the bill and has voraciously defended it, savaged the conservative think tank to reporters on Tuesday, accusing Heritage of smearing immigrant families as lifelong drains on the social welfare system:

Their argument is based on a single premise, which I think is flawed. That is, these people are disproportionately poor because they have no education and they will be poor for the rest of their lives in the U.S. Quite frankly, that’s not the immigration experience in the U.S. That’s certainly not my family’s experience in the U.S. The folks described in that report are my family. My mother and dad didn’t graduate high school and I would not say they were a burden on the United States.

Heritage’s study has come under uncommon scrutiny from conservative and libertarian groups for entirely ignoring the revenue raised by immigration, assuming all immigrants would be on benefits for their entire lives, and using what’s called static scoring, which fails to take into account how reform will impact the economy.

Factoring in taxes, a realistic estimate of immigrants’ use of social services, and dynamic scoring actually shows that immigration reform would greatly propel economic growth.

That’s not in keeping with new Heritage President Jim DeMint‘s message. DeMint, who was once Rubio’s BFF, has been critical of the cost of his protege’s reform package. But when DeMint attacked the bill in a USA Today op-ed, he was relying on a five-year-old Heritage report that pegged the cost of immigration reform at $2.5 million. Apparently that number didn’t do the trick.

Rubio’s response is more intense and more personal than it has been in the past, suggesting his patience with the hard-right, anti-immigration side of his party is wearing thin. But the senator still recognizes the need to keep DeMint and his ilk on board. “I think the report, as much as anything else, is an argument for welfare reform and entitlement reform,” Rubio said.