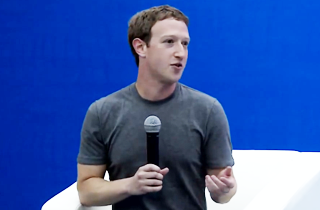 Back in 2010, Mark Zuckerberg mentioned in an interview that he was trying to learn Mandarin, and it seemed like it was one of those things that people half-heartedly attempt to do, like “learning how to paint” or “maybe I’ll learn how to build a patio.”

But no. He committed to it. And today, he did his first public interview in fluent Mandarin — a 30-minute Q&A session with the board of Tsinghua University, which he recently joined as a member.

Learning Mandarin makes complete business sense for Zuckerberg: Facebook has been banned in China since 2009, for its “ability to spread rumors,” according to Chinese officials. In order to crack the Chinese market, and reach hundreds of millions of tech-savvy users, Zuckerberg has hired hundreds of Chinese students, established partnerships with Chinese commerce groups, and joined Tsinghua’s board, which Bloomberg describes as a “meeting ground of sorts for Western corporate higher-ups and Chinese officials.” (It also helped him win the approval of his wife’s Chinese family.)

But it’s also worth it to see the audience progress from “Oh, how cute, the foreigner learned how to say ‘hello'” to “Oh, cool, he can say a few sentences,” to “HOLY MOTHER HE CAN ACTUALLY SPEAK MANDARIN”.