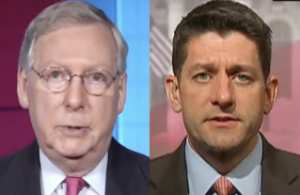 Members of the Republican Party leadership have started to respond to Khizr Khan‘s impassioned plea for them to reject Donald Trump over his continued criticisms of Muslims.

Khan captivated the nation last week when he tore into Trump and his proposed Muslim ban with an emotional speech about his deceased son at the Democratic National Convention. Trump has slammed Khan’s family in reaction to the speech, and Khan implored Paul Ryan and Mitch McConnell to take an “ethical, moral stand” on Friday before they permit Trump’s potential presidency to create a “Constitutional crisis.”

Khan reissued his request on CNN Sunday morning by saying that both the House Speaker and the Senate Majority Leader were setting themselves up for a major political fall if they don’t stand up to the Republican nominee. McConnell responded to Khan this afternoon with a statement that recognized his son as a hero, and voiced opposition to a ban based on a religious test.

McConnell’s statement was followed by one from Ryan, who offered similar sentiments.

A religious test for entering our country is not reflective of America’s fundamental values. I reject it. pic.twitter.com/DdsYj2XoLS

McConnell and Ryan voiced opposition to Trump’s Muslim ban in the past, yet they’ve endorsed him for president. Neither of their statements explicitly denounce Trump or refer to him by name.