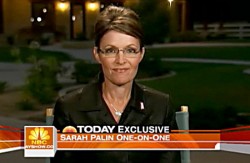 Just hours after NBC aired their interview with Palin’s new next-door-neighbor Joe McGinniss, during which he compared her media tactics to those of the Nazis, she has responded sharply on Facebook. Also, she has a point.

Apparently, Palin had been in touch with NBC regarding their piece on McGinniss, and though she “politely declined” to be interviewed she and Todd did provide a statement — in part because they were promised it would run as a full screen graphic during the interview. It did not. Here are the statements they purportedly sent:

“McGinniss has followed us for some time now, from showing up on our doorstep last winter, bidding over $60,000 for a military charity auction dinner with me, writing the hit pieces, attending at least one Outside book event, etc. He has a right to pursue his subject, I suppose, and certainly has a right to live wherever he wants, but my family also has a right to expect privacy, and hopefully to enjoy peace this summer. Good fences do make for good neighbors. The fence is now up, and I hope that we can enjoy peace. The media sensationalizes the recent McGinniss’ tactic so the public will tune in to whatever the latest episode is, always with ratings in mind, and that’s unfortunate.” – Sarah Palin

“What’s also unfortunate is journalists’ tactics like this, because it keeps good people from wanting to get involved in public service.” – Todd Palin

I will get back to NBC’s behavior in a moment, but first can we just focus on this line: “The media sensationalizes the recent McGinniss’ tactic so the public will tune in to whatever the latest episode is.” Sarah Palin’s memory appears to be extra short in this case since I recall quite clearly that Palin was the person who announced McGinniss’ presence in the first place in a rather sensationally worded Facebook post that quickly turned the incident into a national headline.

The irony of this, however, is apparently lost on Palin.

The interview itself was quite an eye-opener. I’m not sure what “ugly innuendo” was in my Facebook post or why it is so controversial to suggest that the presence of a hostile “journalist” writing a hostile book about me is an imposition on my children who simply want to enjoy their summer outside. When I say or write “leave my kids alone,” it means simply that: let my kids have a fun summer without having a “journalist” 15 ft from their play area. How that equates me with the Nazis is quite beyond me. If receiving nasty emails and even death threats is the standard by which we judge “inciting hatred,” then the left in this country has been “inciting hatred” on my family for almost two years now. We don’t complain about this or call people “Nazis” because we value freedom of speech enough to believe that even ignorant and hateful people have a right to it. It’s a shame that a self-proclaimed “journalist” doesn’t understand this.

Back to NBC, who apparently gave the Palins the “lame excuse” that they would run the comments tomorrow and moreover reaffirmed their interest in interviewing Palin (not if Jake Tapper gets there first!). Meanwhile, NBC tells us that “will run the Palins’ comments on “TODAY” tomorrow. We were unable to run them this morning due to a timing issue.” Which makes me wonder who in this scenario is the more media savvy? And yes, before you ask, Palin does manage to work America’s “freedom” into the mix:

And it’s a shame that Todd and I had another disappointing encounter with the media on Memorial Day of all days. It was time that we could have spent with our kids and on a day when we honor those who have died in defense of our Constitution, including our freedom of the press.