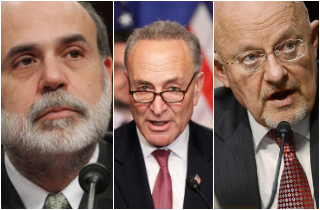 Every a.m., Mediaite publishes a primer of what the interweb machine is writing, talking, tweeting, and blogging about, so that you may fool friends and family into thinking you are a trove of information and insight. Today: Democratic senators break rank and push for Iranian sanctions; inside the government’s NSA report; what Fed “tapering” means for you; and more.

Senators Chuck Schumer (D-NY) and Robert Menendez (D-NJ) defied President Barack Obama on Wednesday and proposed a bill widening sanctions against Iran, a move the White House warns could jeopardize a recent agreement to slow Iran’s enrichment of uranium in exchange for a $7 billion reduction in sanctions.

The proposed bill would allow Obama to waive the harshened sanctions provided he demonstrate on a monthly basis that Iran is fully complying with the terms of the deal Secretary of State John Kerry brokered in Geneva three weeks ago, a provisional agreement meant as a step toward a more comprehensive negotiation in six months. It would also forbid the United States from waiving sanctions on Iran until the nation agreed to dismantle its nuclear program—an option some analysts, including those in the Obama administration, believe is decreasingly viable.

With little time left in the 2013 congressional calendar, the bill will most likely be taken up in the new year.

“Forty-Six Recommendations for the N.S.A.” (Amy Davidson, The New Yorker)

A presidential panel issued its report on the National Security Agency yesterday, making forty-some recommendations to reform the agency’s recently-revealed bulk surveillance program. Chief among the recommendations were that the NSA stop its mass surveillance of phone records, which a federal judge found unconstitutional several days ago. (Judge Leon’s decision sped up the release of the report.) The panel also urged sticter legal oversight over the agency, more transparency in its legal justifications, greater focus on targeting foreign suspects rather than capturing bulk data that could and likely does contain the data from Americans, and more. Quoting Davidson:

The thirty-page executive summary might be further condensed to a few sentences: Don’t do things just because you can. Tell people what the rules are. Remember that “security” doesn’t just mean chasing terrorists—it “refers to a quite different and equally fundamental value,” spelled out in the Fourth Amendment: “The right of people to be secure in their persons, houses, papers, and effects, against unreasonable searches and seizures.” Stop shutting down debate by muttering about a “balance” that needs to be struck between security and freedom—they are not on opposite sides of the scale. Start thinking about privacy.

POLITICO’s Josh Gerstein notes a conclusion midway through the report that the blanket NSA surveillance programs haven’t been particularly helpful in stopping terrorist attacks, and that the information obtained could have just as easily been gained in a more tailored, less secretive manner. “The panel’s report raises a pointed question,” Gerstein writes. “If collecting huge volumes of metadata on telephone calls from, to and within the United States doesn’t bring much benefit, just how much political capital is Obama willing to spend to keep the program going?

TIME’s Michael Crowley reads the recommendations—none of which, by the by, Obama is obligated to enact—as part of a second-term drawback of the war on terror, arguing that the curtailing of the NSA’s surveillance, should it occur, would be part and parcel with the withdrawal from Iraq and Afghanistan, the reluctance to engage in Syria, the reduction of drone strikes, and more.

Meanwhile, the Guardian wants to remind you why you have this report at all, by pairing its recommendations with Edward Snowden’s original revelations.

Yesterday Fed Chairman Ben Bernanke announced the start of “tapering,” the long-awaited rollback in the Fed’s bond-buying stimulus program, though the reduction from $85 billion to $75 is a lot less than what many were fearing. Kevin Roose has a good breakdown of what tapering means for you, for the stock market, for your future house, for incoming Fed Chair Janet Yellen, and more.

Wonkblog’s Neil Irwin has a more in-depth look at why the stock market responded so positively to the announcement yesterday. It includes Hamlet!

“In the War on Poverty, a Dogged Adversary” (Eduardo Porter, New York Times)

Eduardo Porter, a New York Times economic columnist, has a good look at how poverty is measured and then combated, arguing that government programs are doing a better job than they used to of aiding of those below the poverty line, but are running up against a calcifying labor market that precludes economic mobility. An insightful piece that doesn’t just dump statistics but actually examines what they mean.