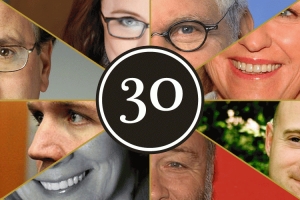 So much for the “new niceness.” From today until Wednesday, Salon’s War Room blog will be revealing its list of the 30 “worst” pundits currently stinking up the media. The inventory is being written by Alex Pareene, who learned the art of biting commentary at Gawker.

Here’s Pareene’s introduction to his project:

Think of the War Room Hack 30 as an all-star team — or a rogues gallery. These are the most predictable, banal, intellectually dishonest and all-around hacky newspaper columnists, cable news shouting heads and political opinion-mongers working today. We compiled the list by reading blogs and Op-Ed sections and watching 24-hour cable news channels for about a decade, and then listing about 200 people who rarely fail to annoy us. We cut the list down to 30 people whose continued employment most baffles us, and then we ranked them in order of shamelessness.

Seems like a sound use of the scientific method.

Already, Pareene has highlighted numbers 30-23 on his list. They are, in descending order of awfulness:

30. David Brooks (“The milquetoast New York Times conservative never has anything to say”)

What do you think of the list so far? Who would you recommend be added to it? Is Pareene totally off-base in calling these eight pundits hacks? And who do you think will end up with the (dis)honor of being named number one? Give us your thoughts in the comments, and keep your eye on The War Room as the rest of it is revealed.