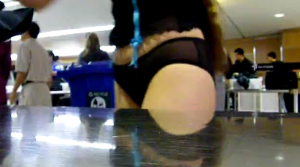 A blogger and “sex worker/pornographer” has jumped into the TSA fray with a new video making the rounds and crashing servers today. While this whole scandal has everything the media could possibly want these days (public anger, undertones of both sex and government oppression), the woman, who goes by Furrygirl, has given the story the one thing it’s been missing this whole time, video of a lady in see-through underwear in the airport. Finally!

Here’s how Furrygirl introduces her experiment in the video she uploaded to her very NSFW blog Feminisnt (which has now crashed due to overwhelming traffic):

“Hello, I’m a pornographer, sex worker, and sex blogger and you can read more about me at Feminisnt.com. I’m a frequent flier who logs about 30,000 miles a year for business and pleasure. While literally millions of people have already seen naked photos of me, for most folks, the idea of complete strangers seeing them naked is a scary and embarrassing prospect. I’m about to leave for the airport where I’m going to get my very first TSA ‘grope down.’ Your first time is very special, so you can record it and put it on the Internet for people to make fun of.”

The argument in the experiment is clear; the pat downs border on sex, so why not dress appropriately? And who better to make this clear than a fit woman, versed in pornography, who’s comfortable with her body? Well, actually, maybe most people would make that argument better, and that’s a bit of the problem here. Wouldn’t it show how ridiculous this whole process more if it was some regular Joe in his or her faded whitey tighties?

Either way, I’m going to make a request right now: Please let this be the last video of its kind.

Now I’m not saying that I want people to stop bringing their iPhones and Flip Cameras through these screenings. Quite the opposite. Technology has given us a wonderful way to make sure those in authority are honest and don’t take advantage. I just don’t want to see anymore “sexy” videos. Let me explain why.

I’m going to step into this lightly, because I don’t really want to impugn Furrygirl (who seems like a very intelligent and cool woman) and her intentions, but this video inches the whole “tape your TSA experience” genre of Internet videos further towards full on self-promotion.

Furrygirl isn’t the first person to go through their screening process in their underwear and tape it, but she’s probably the first person that the denizens of the Internet would like to see in said underwear. As a sex worker, she knows that and the fact that she makes sure to mention her site’s URL in the video implies she was well aware of the viral potential. And, after John “Don’t touch my junk!” Tyner made it all over the news last week, how could she not? And do we really need this news story to bring a bunch of fame hunters like the “Ground Zero Mosque” did?

Others have already wondered whether Furrygirl might have ulterior motives. She has responded to those allegations on Twitter in a typically brazen and funny response (at least, I think it’s funny. I’m going to need to get one of the Geekosystem staff to explain to me what on earth a “command line PGP” is). But she sort of hurts her argument when she Tweets photos of her in the underwear for everyone who didn’t get a clear enough view in the video (photos NSFW).

I want to make clear that I have no problem with Furrygirl using sex and sex appeal to further herself. Unlike some people, I had no problems with Megyn Kelly’s GQ photos (she’s a gorgeous mother and if she wants a professional photographer to capture that, all the power to her). I also have no problem with Capri Anderson using her poor circumstances to raise her brand (some people like to read and talk about celebrity scandals so, by all means, strike while the iron is hot, coked up, and screaming at you in a hotel room). And, furthermore, while I can’t read Furrygirl’s blog right now due to the sudden traffic explosion, if it is what it seems (a blog designed to show that sex workers are real human beings) then it sounds wonderful.

However, there’s just something a little sordid about this video and it has nothing to do with the semi-nudity. This is a serious issue that many people are incredibly passionate about. Should anyone be trying to get famous off of it? Furrygirl claims she did this because she disagrees with the TSA’s measures. We should give her the benefit of the doubt. She made a stand and did it in an attention grabbing way. That’s great. However, can we just decide that this should be the last “sexy person wears sexy underwear during screening” video? I really don’t want to see that become as prevalent for wannabe celebrities as “leaked” sex tapes and terrible reality shows.

Everyone, continue to videotape your screenings. But don’t post them unless something actually happens. And if you do, please don’t use them as an advertisement for your website.