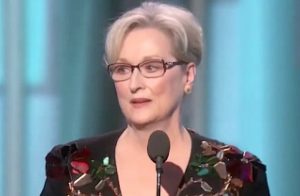 One of the most confounding aspects of the Donald Trump era is that he radically alters most of the old rules and upends the majority of the traditional alliances within our political warfare. There’s no better example of how true that really is than Meryl Streep’s controversial acceptance speech at the Golden Globes in which she torched Trump while urging vigilance among the press to stand up to him and his coming presidency.

In the “olden” days (2015), when a member of the Hollywood elite would inappropriately take time from a live televised speech, which had nothing to do with politics, to attack a prominent Republican, we would pretty much all know exactly which battle station to report to and it would be highly predictable how the ensuing culture war would go down. But now, at least for me, there is no strong sense of clarity as to how to respond. After all, when you no longer know if the Russians are the good guys, or if our own CIA are the bad guys, it shouldn’t be surprising when confusion reigns supreme elsewhere.

Frankly, I’m conflicted over nearly every element of what Streep did.

Was it the proper venue for such an overtly politically and highly-charged message? No. An awards show less than two weeks from a presidential inauguration is not the time nor the place for such a stunt. If anyone in Hollywood had dared say anything 1/10th as critical of then President-elect Obama back in early 2009 (LMAO!), they would have been immediately taken off the stage and relegated to working in faith-based or pornographic films for the rest the their neutered career.

On the other hand, the award Streep was accepting was for “lifetime achievement,” and therefore she does deserve a little more slack because of that fact. Plus, her status as perhaps the greatest film actor of all time also buys her a little more freedom to bend the normal rules of appropriateness. Still, the timing was poor.

Were the specifics of her charges against Trump legitimate? Sort of, but not really. I found it odd that, of all the many very offensive “acting” jobs which Trump performed in 2016 that the one she chose to castigate was that of Trump allegedly mocking a disabled reporter. Not because it wasn’t an inappropriate act on Trump’s part, but rather because it was at least somewhat ambiguous. I have gone back and forth on what Trump was really doing there and, with a gun to my head, I’d probably agree with Streep’s interpretation, but if I was going to pick just one “act” to highlight I would have gone with one in which I was sure.

Since she began by talking about how internationally diverse Hollywood is, why didn’t she discuss Trump’s primo acting job of having conned many millions of conservative-minded voters that he was going to build a Great Wall and have Mexico pay for it, all while pretending to plan to deport millions of people back to Mexico? Now THAT was a performance! I guess that wouldn’t have been coming at Trump from an unambiguously politically correct/liberal position, which is about the only one which makes Hollywood types comfortable.

When Streep called on the press to be “principled” in holding Trump to account and asked for people support and defend journalists for the sake of the “truth,” she was on much more solid ground. It would be difficult for anyone not completely inflected by “Trumpsanity” to disagree that journalism as an institution is in crisis, and that how it faces the many challenges of the coming Trump presidency will go a long way in determining whether it, or the truth itself, have any future relevancy in our culture. Given the fact the award she was accepting was from (the vastly overrated) “Hollywood Foreign Press,” had she simply limited her remarks to this subject they wouldn’t have been remotely unsuitable to the occasion and probably wouldn’t have sparked much controversy.

Of course, the many critics of Streep’s remarks also have some significant philosophical problems with their objections to what she said. Many on Twitter correctly pointed out the hilarious hypocrisy of condemning a celebrity for bringing up politics in a questionable venue when you just voted for a reality television star, with no regard for social norms, to be President of the United States.

In short, after you have helped make Donald Trump our president, doesn’t that mean you have at least given up the right to rip people for getting away with saying mean things in an improper venue simply because they are famous? After all, if Trump himself had lived by a remotely similar code of conduct, he probably never even would have been the Republican presidential nominee.

So, in the end, I have to admit that I’ve experienced yet another bizarre milestone in the magical mystery ride to uncharted lands on which Trump has taken all of us. I think I have to mostly (though not totally) side with a Hollywood liberal against the “Republican” President-elect.

Based on her overall, somewhat disjointed and uneven, political performance Sunday night, I’m still not sure how Streep will ultimately do in her 2020 vice-presidential debate against Mike Pence. However, I have little doubt that she will likely make both the top of her ticket (Michele? Oprah?), and the liberal news media, very proud.