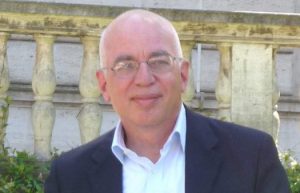 Columnist Michael Wolff is being roundly mocked on Twitter for asserting that journalists covering Trump should be simply “stenographers” who relay what he says to the inquiring public and nothing more.

In an interview with the Digiday podcast published Tuesday evening, Wolff decried the move of some media outlets to resist “normalizing” Trump. This usually takes the form of writers providing context about how atypical and unprecedented so much of Trump’s campaign and transition has been. Wolff condemned that tack as “formally saying we are biased and want to be biased, we are judge and jury.”

“For the moment, the proper response is to stand back, neither approve and disapprove, and wait and see,” he said.

But Wolff’s comments that are drawing the biggest backlash Wednesday are the ones in which he insists that a “very significant piece of journalism” is to transcribe what people in power say, without providing context or analysis.

I thought these people have won an election, so now is the time to go in and say who are you and what do you think. We are not in an oppositional moment right now; that has passed. I actually asked very few questions. I said tell me who you are. He talked and I took notes. Yes, you do want to be stenographers. That’s a very significant piece of journalism. We don’t want to hear [the reporter]. Write it down. You’re there to literally convey what someone in power says, and you bring it to people who want to know. Journalism is now a profession filled with people who are not journalists. They’re all under 25, talking to people under the age of 25. Let me send the message: stenographer is what you’re supposed to be.

Critics were quick to note that, thanks largely to social media, those in government have no trouble pushing out their message in their own words, and that this obviates the need for Wolff’s model journalist who serves as a mere conduit.

@ggreenwald Well I haven’t been 25 in a long time, but that’s an incredible pile of bullshit.

This is a gross dereliction of journalistic duty, but no surprise from Wolff I suppose https://t.co/deHcmhugOk

Anyone who read Wolff’s book about Rupert Murdoch knows he thinks this way. https://t.co/TqFag7SQqE

Quite possibly the most powerful, incisive piece of media criticism Wolff has ever offered, whether or not he realizes it: https://t.co/vds7HNPwFe

in an era where people in power can talk to the public directly through social media, journalists’ job is precisely NOT to be a stenographer

Somebody even trolled Wolff by updating his Wikipedia page to have it say “stenographer” instead of “journalist.” 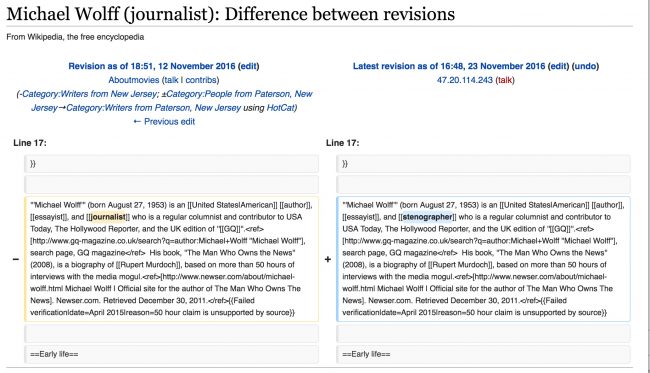 Wolff defended himself in a tweet, writing: “I didn’t say it’s the only job. But it clearly is a basic one. Why even deny it? Self promotion? Self dramatization? Come on.”

I didn’t say it’s the only job. But it clearly is a basic one. Why even deny it? Self promotion? Self dramatization? Come on. https://t.co/thNQJrjVBC