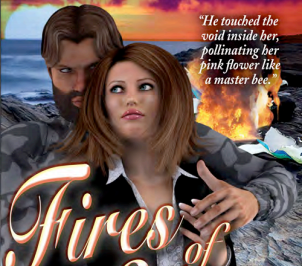 The next Fifty Shades of Grey has an unlikely muse: Minnesota congresswoman and conservative fabulist Michele Bachmann.

Fires of Siberia, a Bachmann-inspired romance novel, tells the tale of a red state presidential candidate who crashes in Siberia during a trip to improve (or invent) her foreign policy credentials, and must make her way back to civilization with the help of a dashing stranger named—wait for it—Steadman Bass.

The novel was written by Tréy Sager, and, arriving in advance of his memoir Oedipus Breast, may be the classier of his forthcoming titles.

Expanded, indeed: the cover features a flaming GIF, lest those fires fail to ignite from the prose alone, and the two characters seemed to have gotten the Taiwanese animation treatment.

While the setting and premise promise much adventure, Sager’s novel still faces a high bar of imagination: its subject, after all, is so skilled at fiction that the Associated Press gave up fact checking her statements during her 2012 primary run.