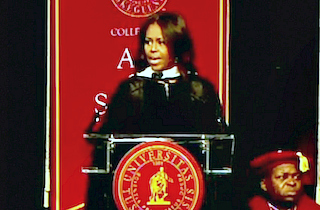 At a speech to the 2015 class of Tuskegee University Saturday, First Lady Michelle Obama candidly discussed the role of race in the media’s treatment of her on the 2008 campaign trail, explaining that it challenged her to gain control over her public perception.

“As potentially the first African-American first lady, I was also the focus of another set of questions and speculations, conversations sometimes rooted in the fears and misperceptions of others,” she said. “Was I too loud or too emasculating? Or was I too soft? Too much of a mom and not enough of a career woman?”

Obama addressed the controversial New Yorker cover that showed the first couple as radical militants in the White House, as well as, per CNN, Fox News calling her “husband’s crony of color” and “Obama’s baby mama.”

“Then there was the first time I was on a magazine cover. It was a cartoon drawing of me with a huge afro and a machine gun. Now, yeah, it was satire, but if I’m really being honest, it knocked me back a bit. It made me wonder ‘just how are people seeing me?'”

“All of this used to really get to me.Back in those days, I had a lot of sleepless nights, worrying about what people thought of me, wondering if I might be hurting my husband’s chances of winning his election, fearing how my girls would feel if they found out what some people were saying about their mom.

“But eventually, I realized that if I wanted to keep my sanity and not let others define me, there was only one thing I could do, and that was to have faith in God’s plan for me. I had to ignore all of the noise and be true to myself – and the rest would work itself out.”

Watch video below, via Reuters: