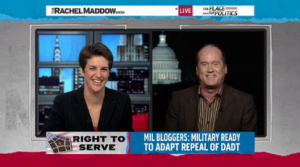 The debate over the repeal of Don’t Ask, Don’t Tell is raged on in the House tonight while the Senate Armed Services Committee voted to repeal the bill. Detractors of the new amendment were adamant that it was unfair of Congress to make a decision before the Pentagon had finished their review of how to implement the change (not whether to repeal it, but how). Meanwhile supporters say that a provision that gives Congress 60 days to go over the Pentagon’s finished statements before enacting the amendment will provide plenty of time to make any changes that are needed. Last night, Rachel Maddow had two military bloggers on as guests and they stated that, with the provision, they wholeheartedly supported the repeal.

The two bloggers, both former servicemen, were Jim Hanson of BLACKFIVE and JD Johannes of Outside the Wire. Both of them had been part of group of military bloggers who released a joint statement a couple weeks ago urging Congress to repeal DADT after the Pentagon review.

The full statement reads as follows:

We consider the US military the greatest institution for good that has ever existed. No other organization has freed more people from oppression, done more humanitarian work or rescued more from natural disasters. We want that to continue.

Today, it appears inevitable to us that the Don’t Ask, Don’t Tell policy and law restricting those displaying open homosexual behavior from serving will be changed. And yet, very little will actually change. Homosexuals have always served in the US Military, and there have been no real problems caused by that.

The service chiefs are currently studying the impact and consequences of changing the DADT policy, and how to implement it without compromising the morale, order and discipline necessary for the military to function. The study is due to be completed on Dec. 1st. We ask Congress to withhold action until this is finished, but no longer. We urge Congress to listen to the service chiefs and act in accordance with the recommendations of that study.

The US Military is professional and ready to adapt to the repeal of Don’t Ask, Don’t Tell without compromising its mission. Echoing Sec. Def. Gates and ADM Mullen, we welcome open and honorable service, regardless of sexual orientation.

JD Johannes- Outside the Wire

Maddow asked the two men if, with the new provision delaying the amendment’s actions till December even if passed, they thought the House should vote this week. They both agreed that the provision was satisfactory and that the amendment should be passed. They stressed though that they should give the Pentagon the full amount of time to devise the easiest implementation.

It’s an interesting segment, not just because of the debate that’s going on right now, but also because the men are a lot of fun to listen to. Hanson gets a big laugh out of Maddow when he points out that “gay people are everywhere” and that he’s heard they “even have their own cable TV news shows now.” Later last night, he joked on his blog that he was actually talking about Olbermann.