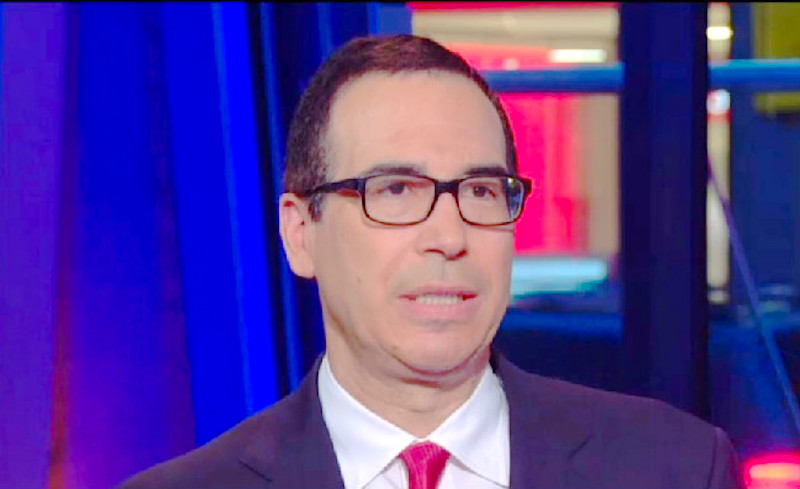 ABC News reported Wednesday night that Treasury Secretary Steven Mnuchin had requested government jet to take him and his newlywed wife on their honeymoon earlier this summer.

Mnunchin allegedly asked for a  U.S. Air Force jet, which according to an Air Force spokesman costs about $25,000 per hour to operate, to take him and his bride, Louise Linton, to their multi-destination honeymoon, which included Scotland, France, and Italy.

This has sparked an inquiry — according to ABC — from the Treasury Department’s Inspector General.

Wow. Mnuchin asked for a government jet for his honeymoon. https://t.co/7CCnPAOtP1

Mnuchin is worth $300 million
He wanted taxpayers who work hard for their money to pay for his honeymoon. https://t.co/s4zoJNkm2R

The Fort Knox trip wasn’t the only time… https://t.co/m8j9ZWiiYN

Mnuchin is a moocher

AKA: people who lecture us about the prohibitive cost of social programs believe they’re entitled to a $25k/hour jet https://t.co/aIvtEu2zYY

Repulsive: Mnuchin and his wife are basically using taxpayer dollars as a charge card for their lavish lifestyle. https://t.co/6UB4TAV83U

Mnuchin made bazillions foreclosing on people. His wife grew up in a castle And STILL they want to fleece taxpayers https://t.co/YoYoUzpiYH

Jet can cost as much as $25k per hour.
Mnuchin has estimated net worth of $300 million. https://t.co/akyGzNYKiV

Dear Treasury Secretary @stevenmnuchin1: Treasury is not your slush fund & Air Force is not your fleet. I can’t believe I had to write that. https://t.co/qcWP0SUD5w