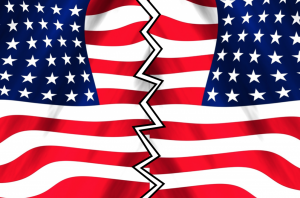 The Fourth of July is the one day each year when Americans specifically celebrate our nation. Sadly, this holiday is not as unifying as it once was. After all, it’s not nearly as politically correct to honor old, white, males (some of whom were) slave-owners these days, and many of our founding principles seem to have been reduced to mere suggestions.

However, Independence Day still generally passes as one of those increasingly rare happenings which most of our citizens share as a communal event, often even literally at community fireworks displays. Given how infrequent these types of occasions are in modern America, it seems to me that the Fourth of July is the exception which proves the rule of this seemingly dangerously divided nation.

In today’s America, we share, in any meaningful sense, frighteningly few moments together. I believe this is a large part of why our politics are so maddeningly deadlocked. If you think of America as a book, it used to be that, while we often disagreed about its meaning, we at least seemed (pretended?) to all accept what the words and the page numbers are.

Today, it appears that we have divided ourselves into ever-shrinking tribes isolated by our own truths which are encased in the bubble of our own self-serving realities. We are largely no longer the USA, but rather the Divided States of America.

As usual, I blame the media.

Ironically, it wasn’t that long ago that the media was the most unifying force that our country had. It seems hard to believe in today’s extraordinarily fragmented media world, but there are still lots of people alive who would routinely once gather in public places to listen to presidential speeches and sporting events… on the radio.

Starting in the 1960s, and specifically with the Kennedy Assassination, television became an even more powerful force for creating communal events. The Beatles became a sensation with just a single appearance on the Ed Sullivan Show. The moon landing was an event now forever etched in every living American’s consciousness.

In the 1970s, television in a four-channel universe became such a dominant presence that to this day secondary stars of middling comedy shows are still considered to be legitimate celebrities. I often kid my friend Franco Harris (NFL Hall of Famer) that if his still-famous “Immaculate Reception” happened today it would be forgotten in a week or two.

The Watergate hearings (even at the very preliminary Senate committee level) were carried live on nearly every television channel. When Bill Clinton was actually impeached a quarter-century later, the trial was jettisoned largely to cable news channels and was seen by a far smaller audience. The fact that Richard Nixon resigned before even getting impeached, while Clinton survived and is seemingly about to have his wife elected president is, in my opinion, a direct result of this fundamental alteration of the media landscape.

In the cable era, television audiences fragmented into a 500-channel (or more) universe. The advent of the Internet further splintered the dissemination of information into thousands of outlets. Today, the very same media which used to unify us (at least with regard to communal experiences and a commonality of basic information), is now the force which most actively divides our country. As someone who lives in the Los Angeles market, where about half the radio and television stations do not even broadcast in English, I can personally attest to how dramatic this change has been.

Today, “Broadcasting” (other than the Super Bowl) no longer exists. It has been replaced by “Narrowcasting,” in which outlets are cynically designed to appeal to nothing but a tiny sliver of demographic for the purposes of maximizing advertising efficiency. This is destructive enough in the fantasy world of entertainment (no current TV show could even remotely claim to be well-known to a majority of Americans), but this has been absolutely catastrophic in the realm of news.

Almost all of our news outlets now can be easily identified as having a particular, and often very narrow, political bent and they act like nothing more than TV sit-coms desperately searching for a sellable demographic which will keep them afloat (see Breitbart.com & Donald Trump). This means that most “news” organizations are only interested in stories and truths that their audience will want to hear. Quite simply, nothing could be more antithetical to both the pursuit of truth (which is quite often very UN-popular) as well as the maintenance of a country which has enough “knowledge” in common so as to be able to function as remotely unified society.

Taking this concept out of the theoretical and placing it into the practical, this is exactly why we saw such deeply divergent opinions among the races regarding the very simple O.J. Simpson murder case (as well as numerous other similar “racial” episodes which have followed) and are currently seeing a civil war among conservatives about the equally clear-cut candidacy of Donald Trump. Each different demographic slice of the American Pie is now simply living in totally separate worlds with completely different realities.

Most of those who get their news only from Fox News, Matt Drudge, Rush Limbaugh, Sean Hannity & Breitbart.com think that Donald Trump is a savior who is certain to win and that Hillary Clinton is the anti-Christ. Almost everyone who only consumes the New York Times, Washington Post, MSNBC, CNN, NPR & the Huffington Post are sure the opposite is true. President Obama’s approval rating is split about 50/50, but, isolated in our own information bubble, almost everyone is positive their view of him is 100% correct. Regardless of your politics, this phenomenon is a cancer on our country.

The worst part of this conundrum is that there is seemingly no way to fix it. In fact, unless television and internet outlets start going out of business at an impressive rate (which is possible), it will likely only get worse. My only immediate suggestions are that we at least become fully aware of this incredibly corrosive force on our national integration, and that we enjoy days like today when most of us are still celebrating the United States of America in a fashion that is at least somewhat unified.