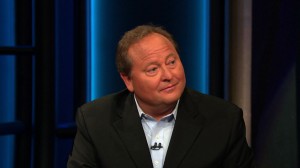 Montana Gov. Brian Schweitzer (D) spoke to The Daily Beast on Thursday about whether his state could be a battleground come November. During the conversation, Schweitzer went further to comment on Mitt Romney as well — saying the GOP hopeful could face problems on the national stage because his father was “born on a polygamy commune in Mexico.”

On the topic of swing states, “Schweitzer said Romney would have a ‘tall order to position Hispanics to vote for him.'” The Daily Beast’s Ben Jacobs “replied that was mildly ironic since Mitt’s father was born in Mexico, giving the clan a nominal claim to being Hispanic.” The governor responded that’s “kinda ironic given that his family came from a polygamy commune in Mexico, but then he’d have to talk about his family coming from a polygamy commune in Mexico, given the gender discrepancy.”

The Daily Beast notes some background on Romney’s father:

Romney’s father, George—who served as governor of Michigan and was a member of the Nixon cabinet and also a presidential candidate—was born in Mexico in 1907 to a family of American Mormons who fled to Mexico when the United States government cracked down on the practice of polygamy. George Romney’s parents were in a monogamous marriage, but Mexico was the last bastion for the practice of plural marriage in the Church of Latter Day Saints. (The church has since expressly prohibited the practice.)