Must Reads: Is the Problem of Income Inequality Too Big to Solve? 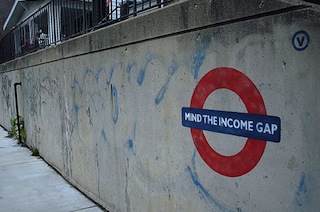 Every a.m., Mediaite publishes a primer of what the interweb machine is writing, talking, tweeting, and blogging about, so that you may fool friends and family into thinking you are a trove of information and insight. Today: new ways to think about income inequality and entitlement reform, AIPAC sees its influence wane ahead in the battle over Iranian sanctions, and more.

“Here’s How We Should Think About the Inequality Debate” (Mark Schmitt, New Republic)

Is income inequality too big to solve? Mark Schmitt suggests we’ve made it seem so by framing the issue in such astronomical rhetoric. He calls for condension of what he calls “this vast galaxy of symptoms, effects, and uncertainty,” into manageable increments of policy problems:

We need a way to talk and think about inequality that presents it as a system, and then finds the points of intervention that might actually change the system. Where, in the current debate, is there a real, comprehensive explanation, a plausible solution that would have a real impact on inequality, and a potentially broad coalition, one that includes the dimensions of inequality that even skeptics purport to worry about?

This would be called a “thought piece,” if that term weren’t off the guest list.

Similarly, Robert Kuttner thinks we think about entitlement reform all wrong. He calls for reforms of social insurance plans like social security and Medicaid, and not in the tiresome budgetary framework we hear constantly. Instead, he wants fewer middlemen and more portability:

What the retirement system needs is a universal, portable pension, to make up for the collapsing private pension system and the minimal retirement income afforded by Social Security. Such a system would acknowledge the reality of today’s labor market, in which few people stay with an employer long enough to qualify for a traditional pension, and few companies even offer one…

“How a Weaker AIPAC Makes It Easier to Vote Against Iran Sanctions” (Sara Sorcher and Elahe Izadi, National Journal)

On the surface, the votes for an Iranian sanctions bill in the Senate—i.e., against the very strong wishes of the White House not to meddle in the interim nuclear agreement that lessons sanctions on the country in exchange for a freezing of nuclear development—looks like a Democratic-controlled Senate defying a Democratic White House. But it in fact could represent a lessening of the Israeli lobby’s influence, as the once indomitable AIPAC slowly gives way to far less hawkish groups like J Street. In short, supporting Israel is no longer automatic among Democrats, complicating the Middle East arithmetic.

“Why Israel Should Worry About the Failure to Pass Another Iran Sanctions Bill” (Shmuel Rosner, Jewish Journal)

Shmuel Rosner doesn’t like where Israel’s weakening influence ends up:

By opting not to send the administration a message with a strong sanctions’ bill – if that’s how this ends – Congress is sending Israel a very strong message. It is a you-can’t-count-on-us message. It is a this-is-where-American-leadership-in-the-world-is-going message. It is you-are-still-at-a-loss-when-it-comes-to-courting-Democrats message. It is an American-Jews-might-still-love-you-but-aren’t-so-sure-about-your-policies message (or, possibly: might still love you, but not enough to support policies that aren’t compatible with the political beliefs of their political camp).

This is the column we’ve all been waiting for: one that tells all those other columnists writing the-sky-is-falling jeremiads against social media to get over themselves, and quick. Read it, share it, make it go viral.