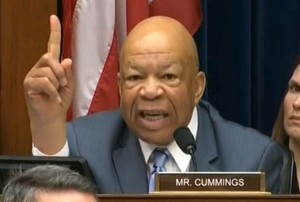 Governor Rick Snyder appeared before the U.S. House Committee on Oversight and Government Reform Thursday for a hearing on how his administration has handled the Flint water crisis, which resulted in the poisoning of an entire community of children with lead. Republicans have consistently tried to deflect blame away from Snyder, even expressing admiration for him, but in his powerful opening statement, ranking Democratic member Rep. Elijah Cummings (D-MD) left no doubt as to where the responsibility lies.

Rep. Cummings began by observing that Gov. Snyder is often complimented for running his state like a business, then asked, “What if this was a business? What if a CEO ran a company that sold toys, laced with lead, that children put in their mouths? What if those children were poisoned as a result, and what if that CEO ignored warnings for more than a year as those kids got sicker and sicker and sicker?”

“There’s no doubt in my mind that if a corporate CEO did what Governor Snyder’s administration has done,” Cummings continued, “he would be hauled up on criminal charges.”

Cummings was just getting warmed up, though, and for a solid six minutes, read Snyder administration emails demonstrating their negligence. Of the federal government’s involvement, Rep. Cummings said, “I agree that the EPA should have done more. They should have rushed in sooner to rescue the people of Michigan from Governor Snyder’s vindictive administration, and his utter incompetence at every level.”

You can watch Rep. Cummings’ remarkable statement above, in full, from C-Span3.