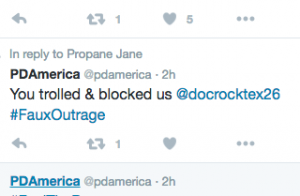 Progressive Democrats for America is a group that has not been shy about its support of Bernie Sanders. Earlier today, they send out a mailer about Hillary Clinton to their subscribers that looked like this:

As you can see, recipients of this particular email were not thrilled. Here’s a pretty succinct explainer on the anger:

*by Confederacy we mean the votes of the descendants of people they fought to enslave https://t.co/3fd0TH1lXi

PDA quickly took note of the furor, issuing tweets with apologies. All of the apologies had a bit of a biting edge to them, however.

Our apologies @AlanGrayson
We screwed up & apologize
As someone recently said, “Now let’s get back to the issues”

The people who were offended by the original phrasing didn’t take the apologies well and the situation devolved into a Twitter spat. When they began requesting a link to a full apology, they got blocked, according to this:

PDA is continuing to issue message on Twitter. This post will be updated if a link to a full apology becomes available. For now, the conversation has become somewhat childish:

@Beulahmo nooope
She blocked us then attacked us for blocking her