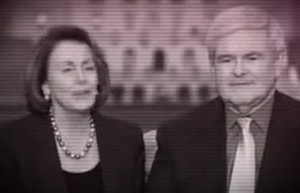 Political operatives on the left have remained largely silent about Newt Gingrich since his ascent to the top of the GOP polls, but Democratic legislators are having trouble keeping the cat in the bag. On the heels of Rep. Barney Frank‘s undisguised delight at the prospect of a Gingrich nomination, TPM reports that House Minority Leader Nancy Pelosi has an avalanche of Newt dirt ready to go, “When the time’s right.”

Does that answer your question, Kirsten Powers?

If Democrats have their way, the answer to that is a clear “after,” and Leader Pelosi is more than willing to do her part. Here’s what Pelosi told TPM:

“I like Barney Frank’s quote the best, where he said ‘I never thought I’d live such a good life that I would see Newt Gingrich be the nominee of the Republican party,’” Pelosi said in an exclusive interview Friday. “That quote I think spoke for a lot of us.”

Pelosi didn’t go into detail about Gingrich’s past transgressions, but she tipped her hand. “One of these days we’ll have a conversation about Newt Gingrich,” Pelosi said. “I know a lot about him. I served on the investigative committee that investigated him, four of us locked in a room in an undisclosed location for a year. A thousand pages of his stuff.”

“Not right here,” Pelosi joked. “When the time’s right.”

The reaction of many Democratic strategists is likely “That’s good to know, but can you ix-nay on the saying it out oud-lay?”

It’s no accident that, despite Gingrich’s rise in the polls, despite every Republican with a dollar and a dream getting a ride in the lead, Democrats have maintained an unwavering focus on one Mitt Romney. In fact, I’ll probably lose a significant number of Professional Left™ Rewards Points (redeemable for discounts at Whole Foods and Institutions of Fancy Book Larnin’) for even pointing this out, but there’s little danger that Nancy Pelosi, Barney Frank, or I will put a dent in conservatives’ shared delusion that Gingrich is the ultimate brainiac who will finally put uppity Barry Obama in his place.

No, if Gingrich falters, it will be at his own hand, or at the hands of his rivals. There has been blood in the water in this primary race for months, and as feeding time approaches, the bites will only get bigger and deeper.