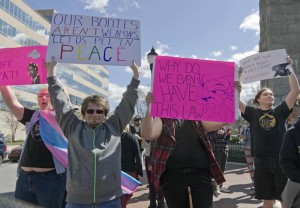 “This is a solution in search of an issue.”

This, of course, is a bathroom law recently passed in North Carolina. Said law, under the Public Facilities Privacy & Security Act, applies to government facilities and public schools and requires people use the bathroom that corresponds with their “biological sex,” as defined by what’s “stated on a person’s birth certificate.”

Personal disclaimer before we continue: We have much bigger problems — even on the state level — for lawmakers to tackle than this. Krauthammer is correct: This is a solution in search of an issue. A transgender person should be able to use whichever bathroom they identify with and therefore are comfortable with. There is no mass (or even a little) uproar about this non-issue and therefore no reason to start dictating terms.

The cons far outweigh the pros… just ask those who work and depend on tourism in the Tar Heel state. Per the New York Times on Thursday:

The singer Bryan Adams canceled his concert in Mississippi in protest against what he called an “anti-L.G.B.T.” law, and the actress Sharon Stone decided not to film a movie there. In North Carolina, Bruce Springsteen, Ringo Starr, Pearl Jam and Ani DiFranco have canceled shows in response to a law regulating transgender bathroom access.

While the celebrity response is drawing considerable attention, the travel industry in each state is more concerned about lower-profile visitors: the everyday tourists who have already begun canceling trips or planning vacations elsewhere.

In Charlotte, which has a large convention center, more than 20 conventions have either canceled or are no longer considering holding their event in the state, resulting in a loss of around $2.5 million according to the Charlotte Regional Visitors Authority.

Businesses are also turning their backs on North Carolina, with PayPal most notably cancelling a major expansion there. The impact is very real.

But like a dog with a frisbee who latches on and can’t let go, some in progressive media circles have decided to take the story to the extreme in an effort to create a blood-on-your-hands-argument. Exhibit A comes courtesy of Jesse Singal, a science editor for New York Magazine and video game columnist for The Boston Globe, who writes suicides will increase as a result of the law. His findings come from one study in something called the Journal of Homosexuality. Per Singal’s recent A Lack of Bathroom Access Could Increase the Risk of Suicide for Trans People:

It’s just not pleasant to feel like you don’t have access to a bathroom where you feel comfortable, and this study suggests that it stands out as a risk factor for suicide.

One study. One conclusion made.

Exhibit B is the Washington Post with this story following the passing of the bathroom bill in North Carolina, which included this warning: Discrimination against transgender people has resulted in a public health epidemic

What’s always left out of these kind of stories, of course, is exactly how many people in this country are transgender. The most credible findings come via the Williams Institute — a think tank and lobby group at UCLA Law focused on sexual orientation and gender identities issues — in 2011, which estimates transgenders make up 0.3 percent of the population. A more recent survey conducted for residents of Massachusetts by the American Public Health Association puts the number in that state at 0.5 percent.

Now ask yourself this: Can a change in one bathroom law in one state really result in a public health epidemic, as the Washington Post’s Shoshana Goldberg and Andrew Reynolds claim? To be clear, the same Williams Institute found that “41 percent of transgender Americans attempt suicide at some point in their lives — compared to 1.6 percent of the general population.” Suicide and attempted suicide is clearly a disturbing problem within the community, but it began long before North Carolina Republicans went down this ill-advised road with Ted Cruz cheering them on after the fact. It’s also much different from a “public health epidemic” when talking about 0.3-0.5 percent of the total population. No matter… that dot back to the North Carolina bathroom law being akin to a death sentence is still being made.

Krauthammer summed it up nicely on Thursday:

Do we really have an epidemic of transgenders being evil in bathrooms across the country? I haven’t heard of a single case. Obviously, if there is going to be this dilemma, I think people ought to work it out on their own. If you have to have legislation, then you need to have a lot of liberation about this.

But we are talking about as if transgenders are like a fifth of the population. This is a very small problem at the edges of other problems having to do with gender identity that’s become national precisely because Republicans in North Carolina decided it was a problem. It is not a major national problem and it should have been left that way.

Again, the feeling here is that the law should be flushed down the toilet if it means more transgenders feeling marginalized and/or discriminated against (and because of the economic impact to those whose livelihood depends on robust tourist revenue).

But in order to force the law back out of existence, resorting to hyperbolic arguments around health epidemics and rampant suicide coming as a result of one law being passed in one state, is not the way to do it.