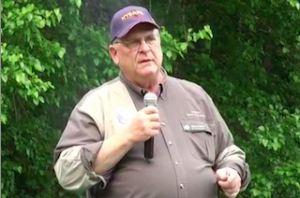 The NRA has a new president and judging by a speech he made at the New York State Rifle and Pistol Association’s annual meeting last June he could generate some controversy for the gun advocacy group. Jim Porter, previously a lawyer from Alabama, told that crowd that he likes to refer to the Civil War as the “war of Northern Aggression” and called Barack Obama a “fake president” whose entire administration is “anti-freedom.”

Speaking at that event in New York, Porter shared some of the shared history between the NRA and the local NYSRPA. “The NRA was started, 1871, right here in New York state. It was started by some Yankee generals who didn’t like the way my southern boys had the ability to shoot in what we call the “War of Northern Aggression.” Now, y’all might call it the Civil War, but we call it the War of Northern Aggression down south.” He added that the organization remains vital today to train civilians to use firearms so “when they’re ready to fight tyranny, they’re ready to do it. Also, when they’re ready to fight tyranny, they have the wherewithal and the weapons to do it.”

After Porter’s history lesson was over, he moved on to the present. Even with all the progress the organization has made over the years, Porter said “this fight has just started.” He added, “I get so sick and tired of all these people with this fake president that we got, who want to say ‘he hasn’t done anything bad for gun owners.’ I say, let me tell you something that he’s done. His entire administration is anti-gun, anti-freedom, anti-Second Amendment.”

Perhaps what’s most striking about Porter’s comments are that they came more than six months before the mass shooting in Newtown, Connecticut that spurred the Obama administration to its first real action on gun control legislation. He has not made any major public remarks since accepting the new leadership position in the NRA, but it’s fairly safe to say that his opinion of the president has not warmed.