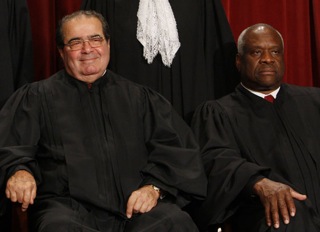 In 2006, legal commentator Jeffrey Rosen wrote that the Roberts court was among the most united and civil in history. In this month’s New Republic, however, Rosen revisits the Court to find it factionalizing in surprising ways, threatening the existence of any single definition of legal conservatism. While Rosen puts the blame on no one, one new phenomenon of the past five years seems directly related to this rift: the Tea Party, for which Rosen argues Justice Clarence Thomas has emerged as its “legal arm.”

In “Disorder in the Court,” Rosen writes this month that recent Supreme Court decisions have outlined a rift among the conservatives previously removed from view (Rosen counts Thomas, Chief Justice John Roberts, Justice Antonin Scalia, Justice Samuel Alito, and Justice Anthony Kennedy as the Court’s conservative members). The key division among them will seem familiar to anyone following modern politics today. Roberts, Scalia and Alito are what would be considered in the non-legal realm “big government conservatives”– socially conservatives with a favorable view towards the unitary executive theory, who tend to defer to presidential powers in big national security cases. Kennedy falls more squarely into the small government libertarian side of the spectrum, preferring to rule in favor of state or local rights rather than the executive. Then there is Justice Thomas, who presents a wrinkle in the dichotomy that Rosen proposes is rather new:

Instead, he is the leader of a third faction that has begun to gain prominence in recent years. Call them the legal arm of the Tea Party movement. They combine economic libertarianism–and a willingness to use courts to strike down regulations–with ardent social conservatism and devotion to states’ rights. Much of their philosophy is traceable to W. Cleon Skousen‘s book The 5,000 Year Leap, which became the movement’s constitutional bible after receiving an endorsement from Glenn Beck. Skousen’s ideas are a mix of John Birch-era opposition to communism, claims that the Founders were divinely inspired, populist opposition to international elites, and radical support for states’ rights.

Rosen argues that this “Tea Party” legalism has rendered the legal buzzwords “strict construction, originalism, or judicial restraint” obsolete as they all apply, in some ways, to all four justices, but veil the very visible philosophical differences among them. Those, he continues, are best served by being described through more political terms. He goes on to conclude that the rifts will make determining how the justices will vote on an issue like health care significantly more difficult than when, say, conservatives first began to form visible majorities on courts thanks to the work of the Federalist Society and other groups.

Rosen is not wrong in pointing out that when the number of people considered “right wing” goes up in any given group, the nuanced differences in their thinking become more prominent. What the Supreme Court is currently undergoing is a form of philosophical pixelation whose higher resolution allows the viewer to perceive variants among the American right that remain invisible without a critical mass of voices sitting on the bench. What makes the observation bizarre for Rosen is that, with the same five people sitting on the Supreme Court five years ago, he declared the Roberts court a new age of civility. In a Time article (also, comically, titled “Disorder in the Court”), Rosen notes that the intellectual spears were being thrown across the political aisle, not just on one side. Describing the Roberts Court as “sometimes barbed, often unpredictable and really quite fun,” he argued that the tensions had risen to “soap opera” levels, but that the statistics on the number of dissents in cases showed the court was “less fractured than the court led for 19 years by William Rehnquist.”

Key in his assessment then is the following quote by Thomas, discussing the need to allow the Bush administration to employ military tribunals against terrorists:

“We are not engaged in a traditional battle with a nation-state, but with a worldwide, hydra-headed enemy,” wrote Clarence Thomas in an impassioned dissent. Thomas felt so strongly–he called the majority decision “unprecedented and dangerous” — that for the first time in his 15 years on the court, he read his dissent aloud.

This attitude falls squarely in line with the “pro-executive” beliefs of the justices from which Rosen labors to distinguish Thomas. Sure, for every instance of big government conservatism under Thomas’ belt, there is a dissent like the one he wrote in Gonzales v. Raich (in which the Court ruled federal anti-marijuana rules may be enforced over state legalization of the drug), in which, in Rosen’s words, Thomas “wrote a sharp dissent that reiterated his skepticism about Wickard and the broad leeway it had given the federal government to regulate economic activity.”

But something about suddenly describing Thomas’ politics as “Tea Party” feels a bit contrived, given that they have not changed since the evolution of the Tea Party into the national movement it is today. Thomas has consistently supported states’ rights and been socially conservative, and still differs little with Scalia or Alito in cases regardless of how much he may praise RV owners to Rush Limbaugh or claim to not consistently follow the beliefs of Richard Epstein. Distinguishing Thomas in this manner does serve as a useful road map to the intersection of states’ rights and social conservatism. It also suggests an undue influence of the movement onto the Supreme Court that seeks parallels in the legal realm to those of the political that may simply not be applicable. The Tea Party movement is young, however, as are, relatively, many of the conservatives of the Court– the true confluence between Thomas’ legal philosophy and their political one may take another five years and another “Disorder in the Court” to adequately decipher.